Christmas is here. This represents for those of us who celebrate it a mixture of feelings that range from the greatest of joys to the worst of depression.  What is a constant is that in any of the cases there will be alcohol involved, either to celebrate the advent of Christ or to drown our frustrations and forget them even while we are drunk. Let’s talk about the first possibility, okay?

One of the things that make us happiest at Christmas is the possibility of getting together with the family and sharing our joy by toasting, eating, singing, dancing, and opening presents.  Christmas is an excellent excuse to meet again with those we love.

For those of us who are looking for reasons to explore and try new beers, the time is ideal.  Almost all over the world, brewers publish their seasonal beers, many of which turn out to be ephemeral jewels that must be appraised in due time since Christmas goes by quickly and we will have to wait another 12 months to taste them again.

Beer is the quintessential Christmas drink, at least in the countries that invented the celebration as we know it today.  Northern European countries, with their dry trees and snowy landscapes, are the ones who invented the custom of producing special beers for the season. Everything seems to indicate that it was particularly in Belgium, towards the end of the 19th century when the master brewers of the local breweries devoted their talents to brewing beer that they used to give as gifts to their workers and friends. This spreads rapidly among consumers and they see the need to manufacture it in larger volumes, initially for the town or city where the factory was located and later for other regions.

The preparation of Christmas beers began in the month of September, specifically around the 29th when the day of San Miguel is celebrated. In those times, the master brewers used the best ingredients that were carefully spiced to obtain a robust, aromatic and tasty beer that could be consumed during the Saint Nicholas festivities.

It was only a matter of time before this local custom spread to the rest of Europe and then to the entire world. 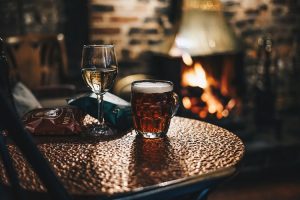 Some scholars attribute the international popularity of these beers to the Englishman John Martin (1886-1966), a beer businessman to whom we could well give the adjective the Santa Claus of beer since thanks to him the Christmas styles reached the whole world. Mr. Martin settled in Antwerp, Belgium in 1909 and from there began to market Belgian Christmas beers to England and Scotland, introducing Gordon Xmas from his Gordon Scotch Ale brewery.  Even today we can find beers generated by this versatile businessman, such as Martin’s Pale Ale (which many still call “the noblest of English pale ales”) or Martin’s Blond Ale. Christmas beers do not make up a style by themselves, however, they maintain some common characteristics, such as the fact that they contain higher-than-average alcohol percentages.

The reason is simple: beer is drunk at Christmas to “warm up” and not to cool down, and alcohol helps to achieve that end. In the same way and for the same reason, Christmas beers are not “light”, but rather contain high caloric levels. Another characteristic that many brands maintain is the spicy aroma, which contributes a lot to the pairing of the typical foods of this season. In general, it is recommended to drink these beers cold but not freezing, since the flavor and aroma of the mixture are totally inhibited.

Drink good Christmas beers, the variety is great.  I recommend that you look for the options, I am sure that you will find them in many places.  They will fill your belly and head with pure happiness.

And you… What new beer did you try this week?  Explore, have fun, and lose yourself in diversity.  Look no further than the corner store. Peace to all and Merry Christmas!