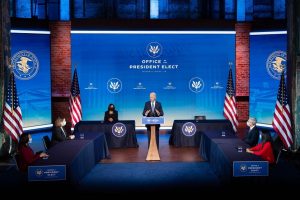 President-elect Joe Biden unveiled a COVID-19 relief package he hopes to get through Congress that will include a stimulus check, an extension of federal unemployment insurance benefits, and aid to small businesses.

The package, aimed at stimulating the economy as the pandemic nears the one-year mark, will also focus on quickly expanding the nation’s COVID-19 vaccination program and virus testing capacity.

The proposal, titled the American Rescue Plan, includes familiar stimulus measures with the goal of sustaining families and firms until vaccines are widely distributed. The current plan is the first of two major spending initiatives Biden will seek in the first few months of his presidency.

The $1.9 trillion in relief Biden is proposing is more than double the $800 billion American Recovery and Reinvestment Act that Democrats passed in 2009 in the wake of the Great Recession.

The plan includes direct payments of $1,400 to most Americans, bringing the total relief to $2,000, including December’s $600 payments.

Increasing the federal, per-week unemployment benefit to $400 and extending it through the end of September, increasing the federal minimum wage to $15 per hour, extending the eviction and foreclosure moratoriums until the end of September. $350 billion in state and local government aid, $170 billion for K-12 schools and institutions of higher education, $50 billion toward Covid-19 testing, $20 billion toward a national vaccine program in partnership with states, localities, and tribes. Making the Child Tax Credit fully refundable for the year and increasing the credit to $3,000 per child ($3,600 for a child under age 6).

“American families face an extraordinary combination of health and economic crises – from COVID-19 to racial inequality to climate change – all of which demand big, bold, and immediate action.  The emergency relief framework announced by the incoming Biden-Harris Administration tonight is the right approach.  It shows that Democrats will finally have a partner at the White House that understands the need to take swift action to address the needs of struggling communities.

“We will get right to work to turn President-elect Biden’s vision into legislation that will pass both chambers and be signed into law.

“After Congress passed the most recent emergency COVID-relief bill in December, Democrats were clear that much more needed to be done.  We are pleased the Biden-Harris package includes much of what Congressional Democrats have been fighting for, including an increase in direct payments to $2,000 for American families, support for vaccine distribution and testing, additional aid to small businesses, funding to safeguard state and local jobs, an extension of unemployment benefits, help for renters and children in poor and middle-class families and more.  The development of multiple COVID-19 vaccines was a tremendous scientific breakthrough, and it means that recovery is on the horizon.  But our country is still suffering some of the highest rates in the entire world of infections, hospitalizations, and deaths from COVID-19.  These proposals by the Biden-Harris Administration will be critical to getting our country through this challenging period and towards a period of recovery.  We echo the President-elect’s call for bipartisan action on his proposal and hope that our Republican colleagues will work with us to quickly enact it.

“The final jobs report of the Trump Administration issued last week was a bright red warning sign that the economy needs additional help right away.  We’ve now lost more than 385,000 Americans to COVID-19, millions of Americans have lost their jobs and are looking for work, hundreds of thousands of small businesses have closed, frontline workers are being laid off and communities across the country are on the brink of collapse.

The robust package announced by President-elect Biden and Vice President-elect Harris shows we now have the necessary leadership in the Executive Branch to turn this around and we are ready to get to work to deliver aid without delay.”