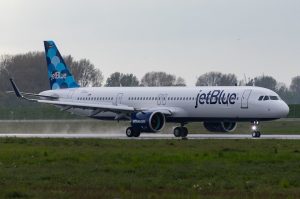 JetBlue announced the start of new service in Miami and Key West, Florida, with the airline’s first flights arriving in each city early today. The move brings JetBlue’s award-winning service and low fares to more travelers in South Florida and introduces new markets to customer bases in the Northeast and West Coast.

“Florida has always played a key role in the JetBlue success story and that continues today, on our 21st anniversary, by introducing our low fares and award-winning service to Miami and Key West,” said Andrea Lusso, vice President of JetBlue Network Planning. “Together, these new destinations offer customers more choice, diversify our flights and enhance JetBlue’s footprint in South Florida.”

“Welcoming JetBlue, one of the world’s leading low-cost airlines and one of the most active in general, to our network is truly an important event in the history of our airport. We thank you for making this substantial commitment to MIA and Miami-Dade County,” said Lester Sola, MIA director, and CEO. “This also would not be possible without the continued support of Mayor Levine Cava, our Board of County Commissioners, and the Greater Miami Convention and Visitors Bureau. We anticipate receiving JetBlue’s 14 daily flights and the considerable economic impact they will bring to our community.”

Miami International Airport was the busiest airport in the US not served by JetBlue. The new service will further expand JetBlue’s presence in Florida, advance the growth strategies of the airline’s focus cities in the Northeast and West Coast, and introduce a new, high-demand market for JetBlue’s large customer bases. JetBlue in New York City, Boston, and Los Angeles. At the same time, the Miami service will build on the strengths of the airline’s focus city at Fort Lauderdale-Hollywood International Airport (FLL) and service at Palm Beach International Airport (PBI) to reach more clients in South Florida.

JetBlue operates routes between Miami and the Northeast using its Airbus A320 aircraft and Los Angeles service with its A321 aircraft with Mint. Each offers the airline’s award-winning service with the most space between seats in economy class (a); Free Fly-Fi, the fastest broadband internet in the sky (b); free unlimited branded snacks and soft drinks; free live DIRECTV® programming and over 100 SiriusXM® radio channels at every seat.

Located right in the City of Key West, just two miles from the main center or city, Key West International Airport brings visitors to the doorstep of everything the island has to offer. The airport also serves as an easy gateway to the neighboring Lower Keys and Marathon, which offer their variety of special attractions and perfect settings.

The new Key West routes are served on JetBlue’s Embraer 190 aircraft, which features comfortable seating in a two-by-two configuration. All flights include JetBlue’s award-winning service offering the most space between seats in economy class (a); free unlimited branded snacks and soft drinks; 36 channels of DIRECTV® programming live for free on personal televisions in the back of seats; and free high-speed wireless internet, Fly-Fi (b).