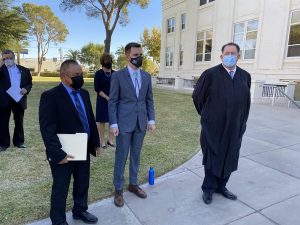 At high noon of Friday, December 5th, in front of the Imperial County Court House JB Hamby and Javier Gonzalez raised their right hand as Judge Christopher Plourd gave them the oath of office to become the new Imperial Irrigation District Directors.

The new directors will bring a new dynamic to the IID as they will add a new voice to the board and will change the direction of the board. Hamby defeated Attorney Ryan Childers and Gonzalez defeated the incumbent, Erik Ortega.

In a last-minute change of plans, Hamby and Gonzalez decided to hold this ceremony at the courthouse to allow their families and supporters to attend the event. In a joint press release, Hamby and Gonzalez stated that they were notified by IID that guests, constituents, family, friends, the community would be excluded from sharing in this moment. The IID was going to limit the number of people on the Condit Auditorium due to COVID-19 so there could be physical distancing.

“Winning an election is never about one person. It takes a whole team to run a campaign — friends, family, and the countless people we met along the way that made our vision a reality,” the statement read, “In the event, we were successful in this campaign, we never imagined that those who made this success possible would be excluded from attending the ceremony where we pledged our commitment to the voters that elected us.”

After this event, there was a celebration for outgoing directors Bruce Kuhn and Erik Ortega. There was also a recognition for the outgoing members of the Energy Consumers Advisory Committee. They are Haydee Rodriguez, Guillermo Hermosillo, Chad Cooper, Philip Bautista, Short Hickingbottom.

The board also presented a resolution honoring Kay Day Pricola for her work leading the Imperial Valley Vegetable Growers Association.

During his initial words after being sworn in, Hamby spoke about the Colorado River and defending the water rights of the Imperial Valley.

“We held in our belief that without water, we have nothing. To protect our Valley’s future, we knew we had to keep our water here with a public vote, by stopping the San Diego Pipeline and establishing leadership across the Colorado River Basin,” Hamby said during his remarks. “At a time when families are hurting due to the worst effects of COVID-19 amplifying already bleak economic conditions in our community, we pledged to commit to science and oppose raising power bills over the next four years.”

Hamby said his victory was the biggest landslide in an Imperial Irrigation District election in a generation.

“We changed the conversation on a range of long-term issues and looked to replace acquiescence, ignorance, and division with active optimism, understanding, and united purpose,” Hamby said.

Gonzalez said that as an activist for more than 30 years he knew what the need of the people is. He said he will continue doing his community work along with his role as an IID Director.

“We need to look at our budget very closely and see what issues are important on what is the best for the community,” Gonzalez said.