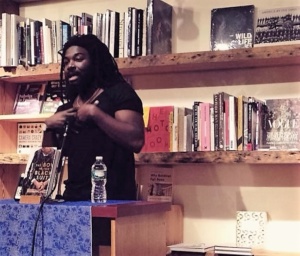 The Library of Congress, the Children’s Book Council and Every Child a Reader announced the appointment of Jason Reynolds as the seventh National Ambassador for Young People’s Literature for 2020-2021.

For his two-year term as National Ambassador for Young People’s Literature, Reynolds will visit small towns across America to have meaningful discussions with young people. Through his platform, “GRAB THE MIC: Tell Your Story,” Reynolds, who regularly talks about his journey from reluctant reader to award-winning author, will redirect his focus as ambassador by listening and empowering students to embrace and share their own personal stories.

Born in Washington, D.C. and raised in neighboring Oxon Hill, Maryland, Reynolds found inspiration in rap and began writing poetry at nine years old. His reading and writing focused on poetry for some 20 more years; he was 17 before he read his first novel cover to cover. He published several poetry collections before publishing his first novel in 2014 “When I Was The Greatest”, which won the Coretta Scott King/John Steptoe Award for New Talent.

In 2017, Reynolds returned to poetry with Long Way Down, a novel in verse that was named a Newbery Honor Book, a Printz Honor Book, and the best young adult work by the Mystery Writers of America’s Edgar Awards.