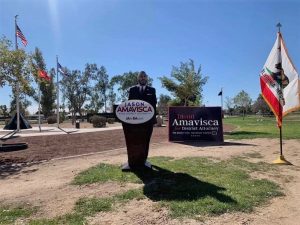 Throwing his name into the hotly contested race for Imperial County District Attorney, Jason Amavisca announced his candidacy for the position and was joined by family and supporters.

Amavisca announced his candidacy at Bucklin Park in El Centro next to the Veteran’s Monument. The site has a personal value to him as he is the son of a World War 2 veteran.

“I am running for the Office of District Attorney because I have a passion for the law, I find litigation and seeking justice very satisfying,” Amavisca said. “I want to represent and seek justice not just for one client at a time, but for peoples of all walks of life, members of our community and the People of the State of California. I want to give back to my community.”

Originally from Los Angeles, he worked in the DA’s office from 2000-2006 until going out as a private practitioner. During his tenure as a Deputy District Attorney, he began his career as a misdemeanor prosecutor and ascended to a felony-level prosecutor. He prosecuted serious cases from murder, attempted murder, sex offenses, robberies, manslaughter, driving under the influence, domestic violence and white-collar crimes such as embezzlement and insurance fraud.

Amavisca said that the Office of the District Attorney is a very powerful office that must be run by an experienced trial attorney.

“This discretion is a concept that must be taken seriously and a decision to accuse someone should not be taken lightly. For that reason, the District Attorney must be someone who must have knowledge of the law and trial experience so that the person in charge of this awesome power has the ability, reasoning and intellect to know when a case brought before the office must be filed and charged,” the candidate stated.

He said that his experience of having been a prosecutor for 6 years and in criminal defense for over 14 years, he knows what a case is worth, what punishment is just so that resources are not spent excessively, resulting in financial waste, clogging the already flooded court system and ensuring that justice is applied.

“Not only do I want to make our community safe, make our members of society feel safe, but we also need to address the needs of offenders and not simply focus on punishment when rehabilitation is appropriate; otherwise, we are only worsening the offenders’ sophistication of criminal behavior, recidivism and not addressing the root cause which could be a variety of factors such as: mental health, drug addiction or dual diagnosis,” he said.

Among his goals, if elected is to establish a Veteran’s Court. The law provides for treatment in certain cases instead of jail for California Veterans. Veterans who are reintegrated into the communities after giving their service to our country, return with PTSD and other health issues that may impact their decision-making process.

“Veterans court would help identify the needs of offending veterans and address their needs by imposing obligations such as attending mental health, community service, in order to rehabilitate the veteran and prevent recidivism. This is not being easy on crime, it’s addressing the root cause of the criminal activity, rehabilitating and promoting public safety while holding the offender accountable,” Amavisca said.

His next goal is to have more community outreach and the District Attorney’s Office be more in contact with the community.

“As your District Attorney, my office will, engage in outreach with our local, county, state and federal law enforcement agencies. Together we can all work to make our community safer and stronger,” he said.

One big problem the District Attorney’s Office has is the constant turnover of staff and attorneys leaving for other counties that offer better salaries. Amavisca said he will work to retain and hire more attorneys.

“I will accomplish this to make every effort to prevent qualified attorneys from leaving the office to seek greater career opportunities, by working closely with our Board of Supervisors and establishing a working relationship to get the funding we need for our employees.

“Moreover, I will work hard to establish an amicable working environment at the District Attorney’s office where I will have an open-door policy to listen to my Deputies’ and staff’s needs. Show them the appreciation that they deserve for their hard work.”