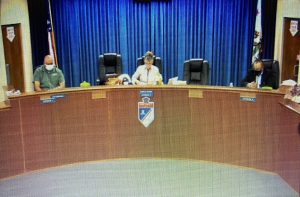 The Imperial Irrigation District Board of Directors had their last meeting of the year in which the division within the board was seen during the election of their new president.

The IID Board selected James Hanks as the new President and JB Hamby will serve as Vice-President by a vote of 3-2 having Directors Alex Cardenas and Norma Galindo casting the dissenting vote. The selection took place in the middle of a very contentious discussion about the governance manual revision that Hanks placed on the agenda. IID Board Vice President Alex Cardenas was not selected to be President.

Director Hanks submitted an agenda item to suspend the IID Board Governance Policy that was adopted in 2007. Hanks said that in the past it was difficult for new directors to get information. The previous board policy stated that a director had to wait two years before being nominated for president.

Hanks wrote on the new resolution that voters demand representatives to fully and immediately, without delay, participate in leadership governance of the organization and it is the responsibility of the board to establish policy that honors the intent of the electors to refresh board visions, goals, and responsiveness. Director Hanks called for the board policy be immediately suspended, that nominees for President be given five minutes for a candidate statement, and that the board shall elect a President and Vice President from its members who shall hold office.

“I am not interested in becoming president of this board,” Hanks said initially.

Director Alex Cardenas asked if IID staff participated in the development of the agenda item. He was told that staff was not involved at all.

“This is clearly an attempt by Director Hanks to disenfranchise the people that live in Division 1,” Cardenas said, “The people of Division 1 had not had a sitting President in 6 years and I consider this a discriminatory act as well,”

Board President Norma Galindo questioned Hanks about this move since she didn’t understand the connection between the resolution and getting more information.

Director Javier Gonzalez said that all directors have a learning curb and wanted to see Hanks lead the board because of his experience.

“We are the rookies but people are expecting us to work like we were in the major leagues,” Gonzalez said.