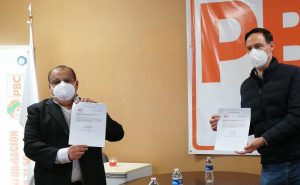 MEXICALI, B.C.- The application for registration by Public Accountant and Lawyer, Jaime Davila Galvan as a candidate for the state assembly to the II Local Electoral District in Baja California was done at the facilities of the Baja California Party last Friday, January 8 (PBC).

It is important to highlight that Davila is a citizen candidate since he does not belong to any political party. Thus, he said, he will renounce prerogatives, that is, public resources for campaign purposes. On the other hand, that work will focus on community work reforesting parks, cleaning streets, and vacant lots.

Dávila stated that along with his career as a litigator, he has been focused for many years on doing social work in the city, however, he expressed that he is in a stage of his life in which his conditions allow him to focus more time and dedicate himself to this area, since he has a great interest in making changes to dignify politics, and working in favor of the city and the community.

Regarding the current race, he explained: “What I try to do is to contribute with something to the electoral process that we can build, (…) so that people can start trusting in our politicians a little more (…) Citizens don’t trust them because the practices are very flawed,” said Davila.

The aspiring Baja California Assemblymember said that this was a pre-registration, in such a way that different citizen candidates will be signing -up, and will wait in the months to come according to the party’s timelines to issue the selection process.

Thus, he said, he is currently working on the collection of organic material for the production of 600 tons of compost, as well as on the project to plant 7 thousand trees in Mexicali.