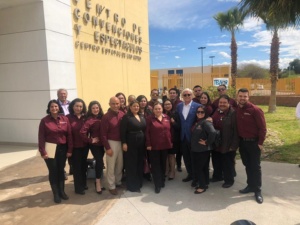 In an official ceremony, the Governor of Baja California, Jaime Bonilla Valdez, accompanied by members of his cabinet, as well as the mayors of the 5 municipalities of the state, presented the 2020-2024 State Development Plan, in which he indicated which will be the bases of his administration for the growth of Baja California in the coming 5 years.

As part of the protocol, the event held at the State Center for the Arts in the state capital was attended by the Infantry Battalion of the second military region, who sang the Mexican national anthem.

The State Secretary, Amador Rodríguez Lozano was the first to speak to explain the details of this strategic plan. He explained that the plan includes 6 thematic axes: Infrastructure Development, Tourism as an economic trigger, Integral social development, Fight against corruption, Security and citizen participation, and Austerity in public administration.

In addition, the governor pointed out that this plan is the product of many hours of work, agreements and joint planning, as a result of the shared efforts that have been made in the first four months of his term. Remarking that his government will always be close to the people, visiting every point of the state in its entirety.

Finally, he highlighted some key projects, such as the modernization and expansion of the trans-peninsular highway (Mexico 1) to four lanes, the remodeling of the international checkpoint in Mexicali, the school breakfast program, as well as decent housing for the most-needed families in the entity.

In the same way, he pointed out that regardless of the duration of his administration, this plan will lay the foundations for the incoming government of 2021 to carry out the strategies and actions that are addressed within the plan.