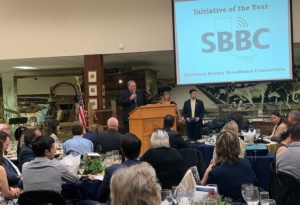 The Imperial Valley Economic Development Corporation celebrated its annual dinner to highlight the achievements during the year.

This was the celebration of twenty-years of IVEDC and their work to promote the area and bring much-needed job creation to Imperial Valley.

“We have a lot to celebrate, we have people that have been in economic development from the very beginning to people that have projects developing at this moment,” said Tim Kelley, IVEDC Executive Director who has to lead the group for the last fifteen years.

IVEDC is a partnership of private enterprise and local government united by the common vision of expanding and diversifying the economy.  As Imperial County’s official Economic Development organization, IVEDC promotes a robust and diversified economy with the collaboration and strategic alliances with the border community and stimulating target industries such as Agriculture, Data Centers, Aerospace and facilitating regional development.

The Imperial Valley Pioneers Museum was the perfect place to have the event since guests were able to learn about the history of the valley.

One of the partners that IVEDC has is the Small Business Development Center.

“We are proud to be here and celebrate with IVEDC and work with them to help new and existing business owners in Imperial Valley,” said Meredith

“The city of El Centro will continue to support IVEDC since they have done a tremendous job bring investment and employment to the valley which ultimately benefits all of us,” Silva said.

The night included recognitions to projects and volunteers that have been part of IVEDC’s overall work.

The investor of the year award went to Douglas Dahm from The Dahm Team Real State. The volunteer of the year was presented by Carla Kuhns and partner of the year went to the Imperial Regional Alliance. To round of the night, the award for the initiative was given to Southern Border Broadband Consortium and the project of the year to Valley Premier Storage.