It’s Urgent to Have a Decent Minimum Wage for Workers

In Mexico, a decent minimum wage for workers is urgently needed.

All presidential candidates must support the proposal to increase minimum wage. Minimum Wage must reach 98.15 pesos and up to 100 pesos a day.

Mexico’s general minimum wage is the lowest among the OECD members. “In Tijuana, the minimum hourly wage is approximately 63 cents per hour, while the minimum wage in San Diego is 11.5 dollars per hour,” said Dr. Alejandro Díaz Bautista, an economist and national researcher at Conacyt as well as researchn professor of the School of the North Border (The Colef).

We call on the representatives of the labor sector, the government and our colleagues from the private sector and academia to evaluate with technical rigor and generosity if the necessary conditions exist to reach the goal of covering 100 (percent of the basic food and non-food basket) for the General Minimum Wage.

Let’s recall that when the new adjustments to the general minimum wage were agreed in November 2017, the plenary session of the National Minimum Wage Commission (Conasami) agreed to revise the salary in April 2018. 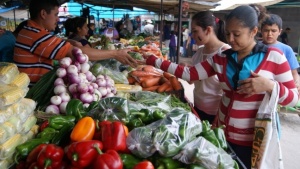 Through salary increases and a large National Agreement for a New Wage Culture, we trust that we can evolve in an orderly but constant way, in order to reach, in a short term, salary levels comparative with the Latin American average, and gradually, approach the OECD levels.

The medium-term goal of the New Salary Culture is that a family on average can cover the welfare line. To achieve this, an annual increase between 7.77 and 10.44 real pesos must be granted during the next 12 years.

With this increase the goal for the year 2030 will be achieved, with a real general minimum wage between 181.58 and 213.63 pesos per day in current values.

It is known that the amount of the minimum wage faces a deficit of 9.25 pesos compared to the minimum line of welfare in the urban environment, declared the National Commission of Human Rights, in commemoration of Labor Day.

In Mexico there is a need for workers to have a minimum wage to guarantee minimum needs, declared the National Human Rights Commission, within the framework of Labor Day in Mexico a few days ago.

.
In March 2018, the Organization for Economic Cooperation and Development (OECD) estimated an annual growth of 2.8% for Mexico in 2018, but there have been few advances in terms of economic and social policy to reverse the advances and inequalities in the income distribution.

The study entitled “Fair Mexico: public policies against inequality”, presented by Oxfam Mexico at the beginning of this annuity, indicated that the 10 richest people in the country accumulate the same wealth as the poorest 50%.