Breaking News
Home / LATEST NEWS / IT WOULD BE CATASTROPHIC IF MEXICO LEFT THE USMCA: GINA CRUZ 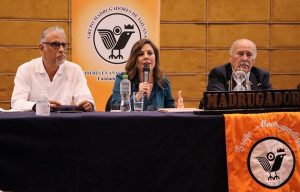 The Senator for Baja California, Gina Andrea Cruz Blackledge, stated that it would be catastrophic if Mexico left the USMCA treaty since this would bring negative economic consequences to the population with the loss of tariff benefits, since that it would be the Mexican producers, who would finally end up paying the price.

She said that during her presentation to Grupo Madrugadores de Tijuana, chaired by Enrique Luviano Erve, who introduced the topic: “USMCA, its non-compliance and the consultation on Mexico’s energy policy.”

As part of her outreach work with organized groups of society, the also president of the North American Foreign Relations Commission of the Senate of the Republic, expressed her points of view and clarify doubts, and responded to the concerns of those present, by explaining the conditions of the trade agreement that Mexico maintains with the countries of North America.

The legislator for the National Action Party pointed out that Mexico cannot fail to comply with the conditions already established with unilateral decisions, or by interpreting them at its convenience, since this violates the trade agreement, as it has been doing in recent years, since this creates uncertainty.

Regarding the energy issue, she mentioned that many investors have already taken their capital out of the country and others are about to do so in the face of the change in rules imposed by the Mexican government, which are aimed at the preponderance of the Federal Electricity Commission (CFE), in the country’s electricity market.

With the entry of private initiative companies, cleaner electricity was produced at a lower cost, however today the use of fuels such as coal and fuel oil, which are highly polluting, is privileged since there was a high inventory of the latter that is produced by Petróleos Mexicanos, and that today is burned by tons for the production of electricity.

With this change of rules, the parallel environmental agreement to the USMCA is violated and the Paris agreements are not complied with, the climate change law is also violated, and the achievement of the millennium development goal in terms of a healthy and healthy environment is made difficult.

“The opportunity to consolidate Mexico as an investment alternative in the face of the trade war between the United States and China is being lost, but we are also losing important opportunities to attract value chains, since the business climate has deteriorated, there is no confidence, which has scared away investment and caused capital flight”.

Gina Cruz explained that in the context of national integration promoted by the USMCA, Mexico would be the main beneficiary in an integrated energy market, with the consequent development of infrastructure, competitive prices, and strengthening energy security.

Given this, the United States has raised important concerns with Mexico regarding energy policies on several occasions, for which resolution consultations will be held soon, but this does not seem to concern the Mexican government.

The most unfortunate and dangerous thing would be the third possible resolution, which is the loss of tariff benefits to Mexico, if the country’s energy policy is followed in this sense, this is the most likely scenario since a cost of compensation has been calculated for 30 billion dollars, which would imply considerable damage to public finances.

“The president has not shown any willingness to repeal the reforms that have motivated the consultations, instead of showing concern, the president, in an open rudeness, has announced that on September 16 he would rule on the USMCA in an open act of propaganda, Foreign Minister Ebrard has denied that Mexico intends to leave the treaty, it would be very serious if this were to happen”.

In the end, those who would pay the bills would be the Mexican producers, since the United States has imposed certain specific restrictions on certain products, arguing sanitary, phytosanitary, and protection measures for endemic species, said Gina Cruz.