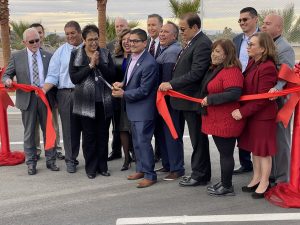 In what was celebrated as a big achievement that will benefit the region, the Interstate 8/Imperial Avenue ribbon cutting took place on Dec. 21.

This project was talked about and planned for twenty years is finally a reality since it will help the future growth of El Centro.

“This is very important for the city of El Centro but I don’t want to diminish the fact that this is a big regional project,” said El Centro Mayor Tomas Oliva. “This is another way to move goods and products to our city. Once we can fully connect Imperial to McCabe, it opens the possibility of commercial and residential projects that will bring growth to our city.”

“This will improve the traffic circulation in the city since Imperial Avenue is very important for us as it has commercial and medical offices and we are so excited about this project,” said El Centro City Manager Marcela Piedra.

Traffic in the project area is primarily associated with the growth in international trade and travel between the United States and Mexico as well as travel on to and from Imperial Avenue north of I-8. The Imperial Avenue interchange experiences congestion in the morning and afternoon hours. Approximately 16,000-27,000 vehicles per day use this section on I-8. By 2025, traffic on this portion of I-8 is projected to almost double.

The $44 million projects are funded through the State Regional Improvement Program and the Federal High Priority Projects Program.

The goal is to provide access from Interstate 8 (I-8) to southbound Imperial Avenue– planned to be extended south of the freeway by the City of El Centro, and eliminate the current out-of-direction travel on city streets and county roads; Improve traffic safety by updating the existing interchange, and Reduce traffic congestion at Imperial Avenue and 4th Street interchanges on I-8 in the city of El Centro.