Incredible progress of NAFTA in the second half of 2018

– “The NAFTA talks are making incredible progress in the second half of 2018”: Díaz-Bautista.

The United States is making fabulous and rapid progress towards the renegotiation of the North American Free Trade Agreement, NAFTA, and an agreement could come as soon as this fall, according to Kevin Hassett, president of the Council of Economic Advisers of the United States in the White House.

The rules for automotive content, one of the most important issues of NAFTA, will be among the first topics addressed in the next roundtables and an agreement is expected quickly between the three countries,” said Alejandro Díaz Bautista, economist, national researcher of the Conacyt as well as research professor of the College of the North Border (El Colef).

Hassett’s optimistic comment echoed that of one of the US Trade Representative, Robert Lighthizer, who said on July 26 in a testimony of Congress that it is possible that the NAFTA partners will reach a tentative agreement in August to renew the pact. President Donald Trump also said recently that the United States is making solid progress in talks with Mexico, but indicated that his administration could first seek a bilateral agreement with that country before negotiating separately with Canada, but NAFTA will continue.

Such a measure would reverse the Nafta’s trilateral agreement with decades of validity and would probably prolong the negotiations for much longer. 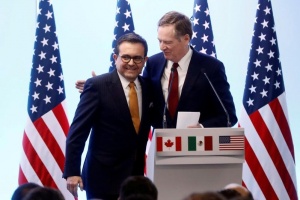 The incoming president of Mexico, Andrés Manuel López Obrador (AMLO), said he wants to keep the trilateral structure of Nafta in place.

The current Mexican administration, Canada, and the United States Congress have said that they support the final agreement has a trilateral structure.

López Obrador (AMLO) in a letter sent to Trump earlier this month also urged that Nafta continue to be a three-way agreement. Among his admirers, the virtual president-elect Andrés Manuel López Obrador (AMLO) has one that has begun to send him letters and is shortly after to sending flowers and chocolates. In reciprocity, Don Andrés answers such missives in the same conciliatory, political but loving tone. They are in the stage of courtship with Trump, both are regarded as a sort of redeemers of their peoples and their troubled circumstance.

In the broadest sense, the two are disruptive, perseverant and successful from a sense of stubbornness and perseverance that has taken them far.

Some Republican members of Congress have urged Trump to reach an agreement quickly and withdraw from a trade war that has hurt his constituents. “Let’s do the work before September,” Tennessee Sen. Lamar Alexander told Fox News on Saturday. “NAFTA has been good for the economy of the state of Tennessee.”

Trump identifies himself with López Obrador and so he has manifested in what I anticipate as an epistolary exchange and the beginning of a relationship that is guessed intense and with enormous degrees of difficulty.

The future of such an affair is to put it kindly, with a reserved forecast and everything points to the fact that we will be witnessing an authentic reedbed of political and personal passions in 2018 and 2019.