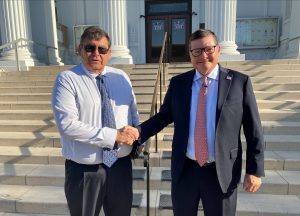 After a year of non-stop campaign work, the voters elected George Marquez as the new Imperial County District Attorney.

Marquez is an attorney from Imperial Valley that has the respect of his peers and the community as a whole because of his good character and humble personality that people trust. This will be the first time in 27 years that a new D.A. takes over the office.

During his tenure as a Deputy District Attorney, he prosecuted many different types of cases, including serious violent crimes, and gang cases, and was also the juvenile prosecutor for approximately four years. As a prosecutor, he conducted jury trials, grand juries, preliminary hearings, and jurisdiction hearings, among others.

Now, among the many responsibilities he will have as the county’s top prosecutor, Marquez says hate crimes will not be tolerated and will be prosecuted to the full extent of the law.

“We will let the public know that any hate crimes based on race, gender, or sexual orientation will not be tolerated,” Marquez said. He added that they will add Hate Crimes Enhancements which impose additional penalties whenever a person is convicted of certain felony hate crimes.

A high-profile hate crime case in Imperial County against a member of the LGBT community that made national news was the Marilyn Cazares murder in Brawley, California. Cazares was known by her friends and family as a soul full of life who “loved to sing and dance” and “never bothered anyone.” She was described by many as brave and cheerful. In 2020, at 22, she was murdered and the case is still unsolved.

Marquez said that hate crimes go underreported but stressed that his office will prosecute them and do outreach to schools and organizations so that people can speak up and get the justice they deserve.

When he was asked what programs will the District Attorney implement to help hate crimes victims and their families, Marquez said that the office Victim-Witness Unit is there to help them in any way they can.

The mission of the Victim-Witness Program of the Office of the District attorney is to support victims and witnesses with services that will help them cope with the aftermath of victimization and help make their participation in the system less difficult and burdensome. This program works closely with other local, state, and county offices to assist victims and their families.

“We will be advocates for the victims and help them with counseling, restitution, maybe giving them a ride to court, but we will be there for them,” Marquez stated.

The California Attorney General defines a hate crime as a crime against a person, group, or property motivated by the victim’s real or perceived protected social group.