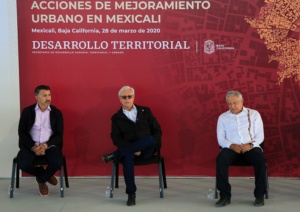 The President of Mexico, Andrés Manuel López Obrador, continues with his agenda of tours around the Mexican Republic. At this time, it was the capital of the State of Baja California’s turn, where the president appeared at the sports complex located westbound of the city. In the midst of the Coronavirus Health Crisis, the President prioritizes his commitments and events over the social distancing that the Ministry of Health has made.

Around 3:30 pm the event began, where few members of the Mexican press were able to access, because the press was restricted to a limited number of people, as a precaution against possible contagion. However, some reporters alleged that access was deliberately obstructed.

For his part, the president expressed feeling happy about being in Mexicali, and be able to witness the rehabilitation of this great space for the development of high-performance sports activities, which has been completed after three municipal administrations. As an asset of great value to the “Santo Niño” community, one of the laggards of the border city.

Later, López Obrador asked people to do not believe fake news, and to be aware of what official sources say; this is due to inquiries about the official Coronavirus figures, especially in the northern states, where they still remain below compared to the official cases reported in California, Texas, Arizona and New Mexico.

Finally, after leaving the site of the official meeting, where the mayor Marina del Pilar Ávila was present, AMLO headed to La Rumorosa and sent a message from there to the nation on his social networks. He then continued his official tour to visit the sister city of San Luis Río Colorado in Sonora on Sunday morning.