Breaking News
Home / BINATIONAL / In Mexico, the United States and Canada there is a strong interest in continuing the USMCA, despite Trump’s possible impeachment: Díaz-Bautista.

In Mexico, the United States and Canada there is a strong interest in continuing the USMCA, despite Trump’s possible impeachment: Díaz-Bautista.

“In Mexico, the United States and Canada there is a strong interest in continuing the ratification of the North American trade pact known as the USMCA, despite the possible impeachment of President Trump,” said Dr. Alejandro Díaz Bautista, economist, national researcher at Conacyt as well as a research professor at the Northern Borders College (El Colef).

The president of the House of Representatives, Nancy Pelosi, announced at a press conference that she will begin an investigation to determine whether or not President Donald Trump will be subjected to a political trial or impeachment for allegedly having pressured the President of Ukraine, Volodymyr Zelensky, to investigate corruption of Joe Biden, former vice president of the United States and the strongest candidate for 2020, and his son.

The problem with this investigation that could lead to the impeachment of President Trump is that it can delay indefinitely the ratification of the USMCA, which was expected to be completed before November 2019 and the formal beginning of the presidential campaigns in the United States in 2020. The problem with the delay in the approval of the USMCA is the impact on the economy and economic growth of Mexico, the United States and Canada by 2020. 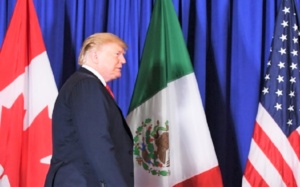 In Mexico, the United States and Canada there is a strong interest in continuing with the ratification of the trade pact, and the impeachment process should not be transferred into affecting the trade-economic relations of the countries of North America. The president of the House of Representatives in the United States and third authority of the country, Nancy Pelosi, announced the launch of the previous investigation for the impeachment process against President Donald Trump.

President Donald Trump doubted that the United States Congress can ratify the USMCA trade agreement with Mexico and Canada before the 2020 elections, due to the intention of the Democratic opposition to initiate a political trial against him.

In order for the  Congress to ratify the USMCA, signed in 2018 by the three North American countries to replace the current North American Free Trade Agreement (NAFTA), it is necessary for Pelosi to agree to submit the agreement to a vote in the lower house, something she hasn’t done yet.

President Trump insisted that the USMCA is a great trade agreement, the best that the United States has ever reached, and that it is phenomenal for farmers and unions.

However, Jesús Seade, undersecretary for North America in Mexico’s Secretary of Foreign Affairs (SRE), acknowledged that in the United States there is concern about the political process. Seade said there are people who see risks in the ratification of the trade agreement, however, from his point of view, he does not believe that politicians in the United States, especially the Democrats, want to mix both issues.

According to sources in “The New York Times”, the main legislators of both parties, Democrats and Republicans, and other officials who closely followed the talks, said that substantial progress had been made in resolving the difficult points of the USMCA, and that a decisive vote at the House of Representatives could occur before Thanksgiving in the United States.