Breaking News
Home / Health & Fitness / In Christmas Season, how much alcohol is enough?

In Christmas Season, how much alcohol is enough? 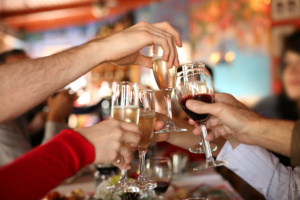 Is there ever really a safe intake of alcohol? With the party season upon us we should be aware of the risks and dangers of alcohol.

The Government has always advised us on how much alcohol we should drink and how often we should drink it. Some guidelines say, like in the UK, that women who drink regularly should consume no more than 14 units a week; that’s the equivalent to 5½ pints of beer or seven glasses of wine. What’s more it also says if people drink, it should be in moderation over three or more days and that some days should be free of alcohol. This means you shouldn’t save up your units and drink them over one or two drinking sessions.

Christmas celebration, posadas, reunions, parties and more offer a wide variety of alcohol and drinks, all for free! So what is important to know before drinking too much in this Christmas Season?

Injuries. Drinking too much increases your chances of being injured or even killed. Alcohol is a factor, for example, in about 60% of fatal burn injuries, drownings, and homicides; 50% of severe trauma injuries and sexual assaults; and 40% of fatal motor vehicle crashes, suicides, and fatal falls.

Health problems. People who drink heavily have a greater risk of liver disease, heart disease, sleep disorders, depression, stroke, bleeding from the stomach, sexually transmitted infections from unsafe sex, and several types of cancer. They may have problems managing diabetes, high blood pressure, and other conditions as well.

Birth defects. Drinking during pregnancy can cause brain damage and other serious problems in the baby. Because it is not yet known whether any amount of alcohol is safe for a developing baby, women who are pregnant or may become pregnant should not drink.

It is been found that when alcohol is free people tend to drink even more. In some cases when getting ready for a party people plan on using a designated driver or a shuttle service, which will save them from many problems and risks, as getting a DUI, an accident, getting hurt or getting someone hurt.

Having a designated driver doesn’t mean you can go crazy and become so intoxicated you are unable to think straight. If you’re totally out of control there is a very good chance you will end up in some kind of trouble that your designated driver cannot protect you from.

When your blood alcohol content is 0.08% or higher, you’re considered legally impaired so you become a potential candidate to be arrested for suspicion of driving under the influence (DUI). If a police officer deems you “noticeably impaired”, or if you fall under your state’s zero tolerance laws (e.g., you under 21 or have children in the car), you could face a DUI even if you are under the legal limit.

Drinking at a party can seem much fun when you don’t take into account the risks factors involved with it. For that reason, be smart about your drinking choices this Christmas Season, it is worth avoiding embarrassment, accidents, traffic tickets, hangovers, a DUI or even the cost of your or someone else’s life.