Imperial Valley Women Ready to Leave Their Mark in Politics

The 2020 election in Imperial Valley has the biggest number of women running for office in recent memory. That is good news for the Imperial Valley as a group of 34 qualified women is seeking to make a change in their community.

It was 100 years ago that the 19th amendment legally guaranteed American women the right to vote. Achieving this milestone required a lengthy and difficult struggle—victory took decades of agitation and protest. Beginning in the mid-19th century, several generations of woman suffrage supporters lectured, wrote, marched, lobbied, and practiced civil disobedience to achieve what many Americans considered a radical change of the Constitution.

Today, their presence is felt in the 2020 Imperial Valley election.

Yulil Alonso-Garza is running for Imperial Valley College Area 4, a seat that a male incumbent held since 1989. Now the seat has 2 female candidates vying for the seat. 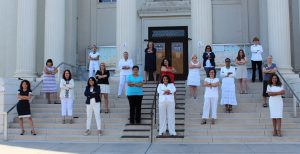 “The three of us had dinner during the last All Female Meet the Candidates Forum hosted by WasupWU productions. Martha Singh and I have been leaning on each other since we declared our candidacy. We have also reached out to other female candidates for support and realized there were a vast number of QUALIFIED women vying for the various open seats across the county,” Alonso-Garza said. “We are courageous women who realized we are ready and willing to lead at the table where decisions are made about our children’s education, our family’s health, and the functions of the city we reside within. We need our community to look at us and recognize we are qualified candidates who can not only juggle a household, but also a school district, public agency, and a city.”

24 months ago, after Hillary Clinton became the first female candidate to win a presidential nomination of a major U.S. political party, and with a record number of women running for Congress in 2018, a majority of Americans say they would like to see more women in top leadership positions – not only in politics but also in the corporate world – according to a new Pew Research Center survey.

The meaningful participation of women in national, local, and community leadership roles has become an important focus on global development policy. Still, some may ask why it matters if women become political leaders, elected policymakers, or civil society activists. Why does the world need more women involved in all aspects of the political process? Women’s political participation results in tangible gains for democracy, including greater responsiveness to citizen needs, increased cooperation across party and ethnic lines, and a more sustainable future.

Women’s participation in politics helps advance gender equality and affects both: the range of policy issues that get considered and the types of solutions that are proposed.  Research indicates that whether a legislator is male or female has a distinct impact on their policy priorities. There is also strong evidence that as more women are elected to office, there is a corollary increase in policymaking that emphasizes quality of life and reflects the priorities of families, women, and ethnic and racial minorities.

There has been no better time than today to consider voting for a woman because a woman can not only be a housewife, a mother, a caregiver for their family, but women can be more than that, women can be qualified and even some overqualified to take responsibilities that can really impact our communities, our cities, our states, and our country.

More than ever, it’s time to create change, to think differently in choosing not only a candidate but the candidate.

Here we share with you the Bio of some of the candidates running this election:

Maria Peinado has over 20 years of experience in public health and is an advocate for students and a resource for parents.

Sonia Carter for El Centro City Council: She is committed to the people and is the only African American Woman running for office in the Imperial Valley.

Learn more about them on their social media pages.