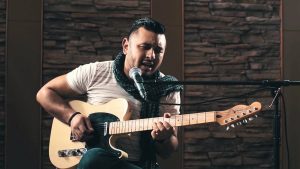 Several media outlets have confirmed the death of singer-songwriter Jerry Demara Monday morning. The cause of death is unknown.

The death of the artist came as a shock to many since the young singer left this world unexpectedly.

Demara made a live broadcast from El Centro Regional Medical Center early Saturday morning saying he was suffering from severe pain in his buttocks for more than six hours. He said he injected himself but still had the pain.

He complained about the service at the El Centro Regional Hospital.

“They are bad people…I asked for water and they treat you bad,” Demara said.

Monday morning, his son made a live broadcast saying that his condition had become worse and asked people to unite in prayer.

Jerry Demara was a singer-songwriter based in Imperial Valley, California. He co-wrote two number one hit singles for Gerardo Ortiz, “Regresa Hermosa” and “Para Que Lastimarme” which both won ASCAP Latin Awards.