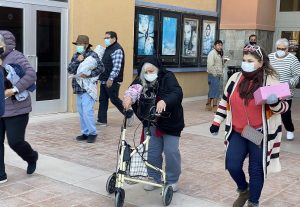 Maria Villa was one of the many senior citizens that camped all night so she and her friend could be the recipient of the COVID-19 vaccine.

Her tenacity of staying all night in 54-degree weather paid out as she received the vaccine and happily went home at 8 p.m.

“We stayed over the night and turned out to be good for us since the El Centro Fire Fire Department brought us coffee,” Villa said smiling as she was leaving Imperial Valley Mall.

El Centro Regional Medical Center posted on their Facebook page a little after midnight that they had reached the 600 people and asked people not to camp at the mall.

“Next time will be more organized since they will give me a call for the second dose,” Villa added.

According to some attendees, the vaccination started at 6:00 a.m. as people were let inside to the food court. There were some problems reported of people that wanted to cut the line. Seniors continue arriving after the vaccination ended, many of them took a cab from Calexico just to get there.

The vaccination process was heavily criticized by the Imperial Valley community for not having a better organization and for exposing the senior citizens.

Beyond Borders Gazette caught up with Dr. Adolphe Edward, CEO of El Centro Regional Medical Center, and said they will improve the vaccination process.

“We will be doing a much better job next time as we will be working on getting an electronic medical system so we can issue appointments that we didn’t so this time,” Edward said.

Edward recommended every one to take advantage of the infusion center at ECRMC. El Centro Regional Medical Center has announced the arrival of the U.S. Department of Health and Human Services’ Disaster Medical Assistance Team to provide support during the current surge of COVID-19 patients. At the request of the state of California, the U.S. Department of Health and Human Services deployed a team of medical professionals from its National Disaster Medical System. The 33-member DMAT includes physicians and other advanced practitioners, pharmacists, nurses, respiratory therapists, paramedics, as well as safety and administrative specialists to provide surge support to Imperial County. Twenty-seven personnel will provide support to ECRMC’s medical-surgical department.

The Imperial County Public Health Department posted on Facebook that they continued to work with State of California officials to secure enough COVID-19 vaccine for those eligible to receive it in Imperial County.

“To date, limited supplies of the vaccine have only allowed us to provide it to those in the highest priority phase/tiers including a small portion of our seniors, 65 and older. The Public Health Department continues to receive vaccines on a weekly basis and anticipates being able to make vaccines more available (i.e. larger scale curbside and drive-thru clinics) to those who qualify in the very near future.  We appreciate the public’s patience and understanding as we continue to work through the vaccine prioritization phased approach in accordance with State and Center for Disease Control and Prevention guidelines.”