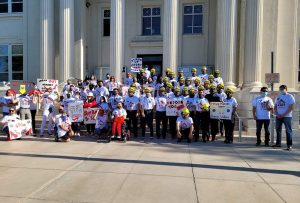 As a group of Imperial Valley residents gathered at the steps of the County Court House on April 30, the message to stop domestic violence and sexual assault were heard again during the “Walk A Mile in Her Shoes” event.

It was a small group than in past years because of the pandemic but the message was as clear as always. The event didn’t happen last year but it returned in 2021 with the same energy it had in previous years.

“We want women or anyone that has been a victim of sexual assault to speak up and get help,” said Margaret Sauza, executive director of Sure Help Crisis Center.

The event has been going for the last twelve years and has gained traction every year since to educate the public and create awareness about sexual assault. More importantly, it’s about educating men about these issues and let them know the limits they have with a woman. Men are invited to this event and wear high red heels to walk a mile and feel the pain women have.

“It’s painful to walk with high heels and the men get to experience it by walking in those shoes,” Sauza said. “They are put on the other side so that men learn more about domestic violence.”

Sexual Assault Awareness Month is an annual campaign to raise public awareness about sexual assault and educate communities and individuals on how to prevent sexual violence. It is observed in April.

The Imperial Valley is no exception and the awareness is expanding.

“My staff has trained police officers all over the valley and now we are called to go to the high schools to talk to the students about sexual assault. Before we couldn’t get our foot on the door of the schools and now they asking us to speak to them,” Sauza said.

This year, members fire academy used the heels and walked with the crowd as well as Imperial County Supervisor District 1, Jesus Eduardo Escobar.

“Sexual assault happens more often than people think. Women-and also the men that get raped-need to speak up and seek help with us or their counselor,” Sauza said.

The Sure Helpline Center is located at 654 Main St, El Centro, California, and is open to those that have been victims of sexual assault. Their phone number is 760-352-7878.