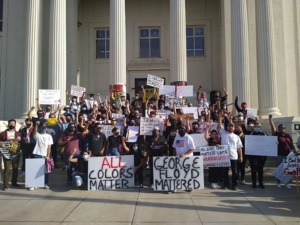 Peaceful protests around the country have gathered to demand justice.

The George Floyd protests are an ongoing series of protests and riots against police brutality that began as local protests in the Minneapolis–Saint Paul metropolitan area of Minnesota before spreading throughout the United States and then worldwide.

Here in the Imperial Valley, a peaceful protest took place on June 1st at the Imperial County Court House where law enforcement and people from the community spoke about the current situation and the importance of overcoming racism.

The Imperial Valley Social Justice Committee organized a peaceful protest to spread one message: Justice and the end of racism.

A large group gathered of diverse people joined the protest that included young people, religious leaders, law enforcement agents, and the community, in general, joined to give a united message.

Earlier that day there were rumors that a group of looters arrived on a bus to start damaging private property. The alert was spread on social media but those rumors were dismissed by the El Centro Police Department.

The protest was peaceful and there were no incidents after the event like in other cities.