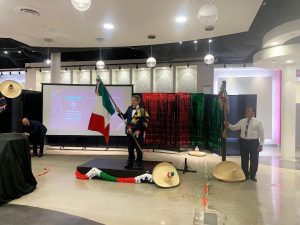 The Mexican Consulate in Calexico initiated the festivities of Mexican Independence Day by gathering the top wine and craft beer exhibitions at an event held at the El Centro Regional Medical Center’s Community Education Center.

Joining the worldwide celebration, the consulate offered delicious food, music, and a great time to the community present at the event. Consul Tarcisio Navarrete Montes de Oca gave the traditional “Grito” as part of the ceremony.

The Mexican Consulate joins all the consulates around the work to celebrate their independence by organizing events that bring the community together.

“The purpose of this event is to allow the Imperial Valley to get to know the wine and craft beer producers of Mexico,” Consul Navarrete said. “We are proud to share Mexican gastronomy with community leaders and other agencies from the Imperial Valley.”

Cerverceria Once Perros from Mexicali was part of the event giving the attendees a taste of their high-quality beer. Once Perros has been one of the top craft beer favorites and were invited to participate.

“We are grateful to the Mexican Consulate for the invitation so that the people from this side can experience our product, meet new people and reach new markets,” said Rolando Romo from Once Perros.

Fiestas Patrias is traditional celebrations of Mexican national pride, independence, and culture that take place both in Mexico and across the United States.  These celebrations coincide with the National Hispanic Heritage Month, which is observed from September 15 to October 15 every year.

While five political holidays typically make up Fiestas Patrias, the most famous is El Diez y Seis de Septiembre, also known as “El Grito de Dolores.”  It began in 1810 when Father Miguel Hidalgo y Costilla preached to his churchgoers in Dolores, Guanajuato, Mexico, that it was time to rise and break free from Spanish rule.