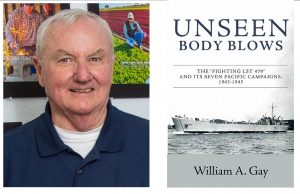 A Valley resident’s book, “Unseen Body Blows,” has been awarded a silver medal by the Military Writers Society of America during its 2020 awards presentations announced Saturday (Sept. 19).

The author is William Gay of El Centro. The book is the story of life aboard one of the original World War 2 tank landing ships as it operated in seven Pacific Campaigns. Gay’s father, Alex, was one of the first “plank-owner” crew members aboard the ship, LST 479, where he served as communications officer.

The writers’ society is a nationwide association of authors, poets, and artists who have a military affiliation. Most are either active duty military, retirees, or veterans. The author is a Navy retiree and president of Reliance Public Relations. He is also co-publisher of the magazine Imperial Valley Alive.

The book details the lives of crew members who began service aboard LST 479 as a group of inexperienced amateurs. Over the course of the 1,046-day life of this ship, they became proficient warfighters. Alex Gay, who after the war had a career in advertising and public relations and was a two-term El Centro City Councilman, died in 1990.

“This book seeks to bring literary life back to this long-forgotten ship that was quickly taken out of service and scrapped after the war,” Bill Gay said. “These ships were considered expendable, and their individual contributions were, frankly, lost. My intent of writing this book was, in some small way, to add them to the recorded history of World War 2.”

Sources used in this book include an enlisted crew member’s secret journal that the author discovered at the University of Pennsylvania library; Alex Gay’s personal papers; interviews with crew members and their relatives, and numerous ships’ logs and other wartime records.

There were 81 books submitted into the 2020 MSWA judging. Three separate judges evaluated and scored the entries. Fifty-five received high enough scores to be declared finalists and qualify for either a bronze, silver or gold medal depending on the level of the score. Gay’s book was one of seven in the history category.

The “Unseen Body Blows” title is derived from comments in a postwar history written by an anonymous crewman aboard the LST. “Our ship slipped in those almost unseen body blows…” that led to the defeat of Japan.

In its review of the book, the MWSA noted “…From the concept, design, and building of the LSTs in general—and LST 479 in particular—to amusing images of inexperienced crews tooling around the coast of California in newly designed, built, and delivered LSTs, to early adventures in the Aleutians, to the harrowing Pacific battles in 1944 and 1945, William Gay both educates and entertains the reader…LST 479 herself becomes a beloved ‘action’ character. Her journey from shiny new vessel to a tired-old rusting hulk, to the proverbial scrap heap is both educational and fun…”

Information about the awards, as well as the complete MWSA review, can be found at http://www.mwsadispatches.com/2020-season. More information about the book is available at www.unseenbodyblows.com and on Facebook at www.facebook.com/unseenbodyblows/.  It is for sale locally at Greens Jewelry and Gifts, 670 Broadway, El Centro; Auctions and Antiques, 455 W State St., El Centro; the Imperial Valley Pioneers Museum, and Reliance Public Relations, Inc., 1850 W. Main St., El Centro. It is also available online through Amazon, Barnes and Noble and FriesenPress.