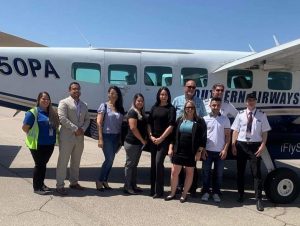 Residents can now hop on the plane for an exciting time in Las Vegas, Nevada as Southwest Airways Express officially inaugurated its first roundtrip flight to Sin City from the Imperial County Airport.

Landing at the Harry Reid International Airport, Imperial County officials had an exclusive look at the airport and the operations of the airline as they expand their services to Las Vegas and possibly an additional route to Phoenix, Arizona down the line.

“This service to Las Vegas will open a lot of adventure and will bring a lot of tourism for Imperial and Mexicali Valley,” City of Imperial Mayor Geoff Dale said. “I have friends in Mexicali that would love to go to Las Vegas in less than five hours. This will be a great addition to the valley,”

Imperial County Airport manager Janell Guerrero said that they will have flights every day except for Tuesdays.

The routes are subsidized under the federal Essential Air Service program, and since 2019, Imperial has been one of the top-performing communities in all of EAS.

Mark Cestari, Chief Commercial Officer of Southern Airways, said this will be a great benefit to the customers since they will now have more options to connect to other flights. Southwest currently has four flights a day to Los Angeles.

“Las Vegas is a huge market from a local business perspective, there are lots of manufacturing south of the border so we think it’s a lucrative market, and they are now connected,” Cestari said.

In the year before the COVID pandemic, 12,800 passengers used Southern’s flights at Imperial. Throughout the pandemic and beyond, Southern has posted a controllable completion rate of 99.3 percent, which means, excluding weather cancellations, the airline has been virtually perfect for the last 26 months.

Fares begin at $69. Tickets are on sale now at www.iFlySouthern.com, as well as all online travel agencies such as Travelocity, Orbitz, and Expedia.