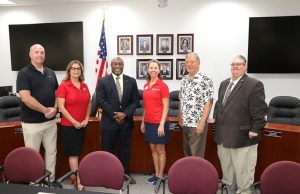 Imperial Valley College has renewed its seven-year-old articulation agreement with the University of Arizona-Yuma campus that allows college students transfer options to earn a bachelor’s degree and still remain relatively close to home.

The university is offering regional educational pathways in Science, Technology, Engineering, Agriculture, and Mathematics (STEAM) focused on students working to obtain Bachelor of Science degrees offered at the University of Arizona—Yuma Campus.

It is called the “ValleyCats Initiative.”

The Memorandum of Agreement was signed by Tanya Hodges, University of Arizona Regional Academic Programs Coordinator, and IVC Superintendent/President Lennor Johnson in a ceremony on September 29 at IVC.

“This is all about giving our students options for transfer to a major university and be able to stay close to home,” Johnson said. “This has been a very successful partnership since it began in 2015.”

Also as an incentive, students who choose to attend the University of Arizona campus in Yuma after transferring from IVC will be eligible to pay the state tuition for Arizona. “Even if you’ve lived in the Imperial Valley your whole life, you won’t have to pay the out-of-state fees, which is a huge deal,” Johnson said.

The transfer process will also be facilitated. IVC will coordinate through course articulation and curriculum alignment geared toward students transferring from IVC to UA-Yuma. Additionally, the university will partner with IVC’s Career Services Center and IVC’s Transfer Center on continuing to develop a seamless transition from the community college to the university.