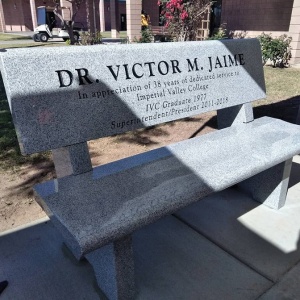 Dr. Víctor Jaime has been recognized by the community for many years for his dedication for the students and the community.

One more recognition was added on April 5th with a bench dedicated to him at Imperial Valley College for his 38 years of service to the college.

“Today we recognized a man of honor like Dr. Jaime who personally during my career believed in me when I didn’t believe I had the potential he saw in me and I’m so grateful to recognize him for his work for the college and community,” said Martha Garcia, President/Superintendent of Imperial Valley College.

“He brought the campus together in a moment of economic distress and accreditation problems. He brought us together to solve those major issues,” García added.

Jaime was recently appointed to the Imperial County Office of Education Board of Directors where he will bring his experience in education to support all the schools in the Imperial Valley.

“I’m humble for the honor but it was never about me but how I could give back and make sure the college was there for the students and the community, we worked a lot in student access and student success,” Jaime said.

Jaime is a first-generation college student born and raised in the Imperial Valley. Graduated from IVC and from here transferred to a university outside of the valley not knowing if he was going to come back. He started out as a counselor and later became dean of financial and state programs for a number of years, vice-President for Student Services, and for seven years as Superintendent/President of the college.