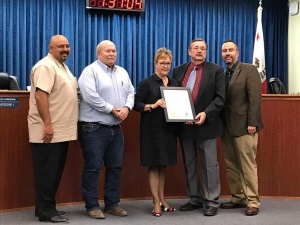 The Imperial Irrigation District Board of Directors passed a resolution honoring James Hanks’s Term as Board President.

At the IID Board meeting, Hanks was honored with a resolution thanking him for his leadership as President of the Board and his hard work in 2018.

Following his election to the Imperial Irrigation District Board of Directors in the 2006 primary election, was appointed by the Imperial County Board of Supervisors on June 27, 2006 to fill the sudden vacancy on the board on Division 3, and has been successfully re-elected to three full terms and has served as board President in 2009, 2014 and 2018.

During his most recent tenure as Board President, Hanks was intensely focused on many significant water and energy issues, such as:

The resolution pointed out that in 2018 that the district entered into a power purchase agreement with Citizens Energy to purchase 30 Megawatts of solar power for the eGreen program that will directly benefit approximately 15,000 eligible income ratepayers.

“Even with the many pressing issues that still lie ahead for the IID, the District is better situated because of Director Hanks’ sage advice and tireless advocacy,” the resolution read.