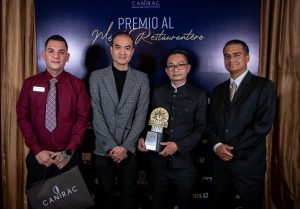 The Imperial Garden restaurant on Avenida Madero in Mexicali, Baja California is the best place to eat Chinese food in the city due to its great cuisine and customer service.

It was for this reason that Imperial Garden received the award granted by CANIRAC (The National Chamber of the Restaurant and Seasoned Food Industry) Mexicali, the organization that is an advocate for the restaurant industry, for being a restaurant in the city that represents the “Gastronomic Culture” extolling culinary wealth and successfully promoting its dissemination in the city.

“It was a surprise for me, for us to receive this award,” said Kevin Tan, “In a restaurant, you need to have tasty food, good customer service, and a place with a good atmosphere. One person can’t do everything and it is a team effort.”

Decorated with paintings and collections brought from China, Imperial Garden has positioned itself as a different place from other restaurants thanks to its good flavor and dining rooms where entire families and friends can enjoy a pleasant time.

The driving force behind this success is Kevin Tan who is the restaurant’s General Manager and the Executive Chef, Alex Yu. Both are originally from China but have found a home in Mexicali where their families have benefited from the success of their work.

Imperial Garden is part of a tight-knit Chinese community that shares a long history with the city.

“This award is not only for Imperial Garden but also for the community,” Tan said.

Chef Alex Yu has over a decade of experience in the kitchen, eight of those years he has lived in Mexicali where he manages a staff that serves approximately 1,500 customers per day.  Yu continues to train himself to have better knowledge of how to make better dishes and experience on how to guide the cooks.

Imperial Garden also does social service to the community.  People can visit the Koi fish pond area that was hatched on the opening day of the restaurant.  By feeding the fish, the funds raised are used to feed nearly 500 children and teenagers in foster homes in Mexicali through the Marianita Curiel Foundation.