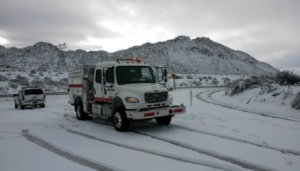 In 2018, the State of California experienced wildfires that caused a great deal of damage and disasters were proclaimed. The approval of these emergency proclamations made Imperial County an eligible recipient for Hazard Mitigation Grant funding.

Funding was made available to Imperial County agencies by this disaster competitive grants, technical assistance, and program support. This grant application requested funding in the amount of $150,000 to update and enhance the multi-jurisdictional Hazard Mitigation Plan. The Federal Share will be 75% or $112,500 and the Local Share will be 25% or $37,500 of In-Kind Services. Therefore, Imperial County Fire Department requested the approval to use grant funds to hire a consultant to update the hazard mitigation plan.

In order to update the plan, a Hazard mitigation working group will be formed to collaborate on the plan consisting of representatives from the cities of Brawley, Calexico, Calipatria, Holtville, Imperial, Westmoreland, El Centro, the County of Imperial, Heber Public Utilities, Bard Water District, Salton Community Service District, Imperial Irrigation District, and the Imperial County Office of Education.

The group will organize their resources and coordinate the development of this plan update by using available information regarding recent disasters and other existing resources to complete the update and enhancement of the plan.

The work will take approximately 9 months and it has to be approved by state and federal agencies for final approval and adoption.