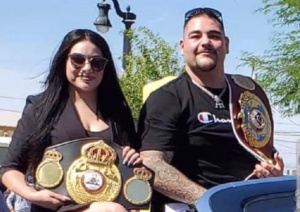 Early today, during the first hours of the morning, Imperial County workers were given the task of setting up everything to closing the streets and pay tribute to their new hero: Andy Ruiz Jr.

From 8am, residents from all over the county and even across the border, from Mexicali, gathered in the City of Imperial’s Downtown to receive the brand new world heavyweight champion: Andy Ruiz, who was honored to spend time with the people of the place that saw him since he was born, 29 years ago.

With banners of messages with support, floats and a parade by students of Imperial High School, people celebrated around local police officers surrounding Ruiz, chanting his name, and recognizing his great feat the past June 8, when defeating the British, Anthony Joshua, with a knockout.

The Tour started from 4th Street to Imperial High School, where Andy Ruiz offered some words of gratitude to his people, emphasizing the value of this community, which aspires to better things for their well-being, is an example of life, which has stamped his name in the history of sports, to which much they hope to repeat in some other field.

A week ago, Andy had been honored by the President of Mexico, Andrés Manuel López Obrador, who received him at the National Palace in Mexico City, and handed him a commemorative ticket with the initials of the Mexican-American boxer.