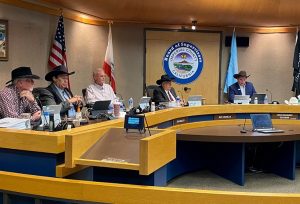 As the County of Imperial proceeds with efforts to encourage the development of lithium from geothermal brine at the Salton Sea Known as the Geothermal Area, also referred to as Lithium Valley, to improve the region’s economy, the County is regularly in communication with the state and federal organizations. The communications are focused on identifying or creating incentives for potential developers, manufacturers, and other vertically aligned businesses.

To foster a strong relationship with the Governor’s Office of Business and Economic Development, as the agency will play a vital role in attracting, guiding, and retaining lithium-related business to Imperial County, staff drafted a letter to GO-Biz Director Dee Dee Myers. The letter is to invite Myers to Imperial County to see a significant opportunity in Imperial County to derive enormous economic benefit from this resource and the necessity to have an economic development professional employed by GO-Biz based in Imperial County. This individual would work closely with the County to coordinate efforts with the private sector and various State agencies.

The letter stated how Imperial County has faced many economic struggles including chronic double-digit unemployment rates, high poverty rates, and lower median household income when comparing them to the state and the nation.

“While we have a multi-billion dollar agricultural industry and are one of the largest producers of renewable energy in California, the direct benefits to our residents are minimal,” County Board Chairman Jesus Eduardo Escobar stated.

Fortunately, Imperial County is blessed with an abundance of Geothermal Brine at the southern end of the Salton Sea.

The earth-heated brine is rich in critical minerals needed for the production of batteries and alloys, including lithium, manganese, and zinc.

Additionally, there is an estimated 1,500-3,000 MW of additional geothermal energy generation available.

Escobar mentioned in the letter how Imperial County is recruiting for the position of Lithium Valley Ombudsperson within their organization to engage with stakeholders and assist in communication with state and federal agencies; however, they can increase their chances of success by leveraging resources and combining efforts.

“Therefore, we request that GO-Biz recruit an economic development professional based in Imperial County who would work closely with the County to coordinate efforts with the private sector and various state agencies. It is essential for GO-Biz, and the State, to have an individual that lives and works in Imperial County, full-time, who can focus on lithium development and related economic development efforts,” Escobar added.

The County invited the Director of Go-Biz to personally tour the region and see what is occurring relative to geothermal production and lithium extraction and work with Imperial County to expand this region’s economy.