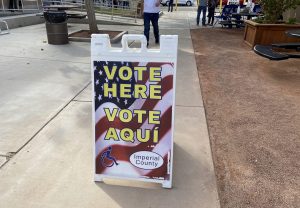 Election Day in Imperial County has come and gone and voters have sent a group of new people to lead them for the next four years.

Unofficial final results published by the election department at 1 a.m on Nov. 4 showed that voters want new leadership as several incumbents were not re-elected.

The El Centro City Council race has Mayor Efrain Silva winning a new term and will be joined by Sylvia Marroquin and Martha Singh. Council members Jason Jackson and Edgard Garcia are far away from the list.

In the IID race, it looks like there will be a turnover in the board as JB Hamby defeated Ryan Childers for the open seat. With 64 percent of the vote, Hamby declared victory Tuesday night. Javier Gonzalez has a small lead against IID Director Erik Ortega and the race is too close to call.

In Calexico, Gloria Romo, Javier Moreno, and Camilo Garcia are leading the votes for the 4-year term. Raul Urena, 24, is defeating Morris Reisen for the two-year seat. Urena will become the youngest councilman in the history of Calexico.

Incumbent Jerry Hart will remain on the college board as he defeated Hilton Smith.

Isabel Solis has a comfortable lead against Yulil Alonso-Garza. Both were looking to represent Brawley on the IVC board.

“The Registrar’s staff will work diligently to complete the election canvassing process and update the public of results promptly.  The Registrar’s office wishes to thank the public for their patience as they continue to conduct canvassing for this election,” Dale stated.