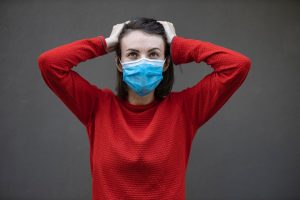 After weeks of tumultuous meetings packed with people that oppose mask mandates and vaccine mandates, the Imperial County Supervisors had a choice to make: either to appease them by removing that order or continue with it based on the current data.

The decision contradicted the recommendation made by County Health Officer, Dr. Stephen Munday, who said that based on the downward trends in COVID and other factors, that the County modify its current health order on Nov. 22nd to align itself to the state order once it’s more clear the process of vaccinating kids 5 to 11 years old.

The reaction of the citizens present that were against the masking order was of gasps and laughter as they wanted immediate action.

Dr. Munday repeated that his recommendation was to align themselves to the upcoming state order on Nov. 22nd.

Another member of the audience shouted as to why Munday and Imperial County Health Director Jeanette Angulo was via Zoom and not in person. Supervisor Ryan Kelley raised his voice and said he asked them not to come since they have been verbally attacked at previous meetings.

“If you have an issue then take on me, not them,” Kelley said.

Supervisor District 1 Ryan Kelley made a motion to end the masking requirement on Nov. 1st. Supervisor Escobar said that if that was the motion they would need to have a verbal vote since they would be going against the health department’s recommendation. The motion passed.

Several people attended the meeting and spoke against the mask and vaccine mandates saying it has affected their work and lifestyle. One teacher said that she is on leave due to her refusal to take the vaccine even when it goes against her moral beliefs.

Pastor Walter Colace said that it is unfair that the government is blaming people that haven’t taken the vaccine and making them the “villain” of the story.

“It is truly unfair that people are losing their jobs because they chose not to be vaccinated or forced to go against their conscience. Parents should not be forced to vaccinate their kids since data shows children are not affected by COVID,” Colace.

Since Aug. 17, the Imperial County Health Department issued a universal masking order in the abundance of caution due to the rise of variants of concerns in the county. The local universal masking order was in response to a recent rise in local, statewide, and national COVID-19 cases, hospitalizations, and deaths due to the Delta variant. This action aligns with Centers for Disease Control and Prevention (CDC) recommendations and California Department of Public Health (CDPH) guidelines and orders.

The goal of the order was to protect the community and local healthcare system from a major resurgence of COVID-19 cases and to allow businesses and services in Imperial County to remain open.

Under this order, Imperial County residents and visitors are required to wear face coverings in all indoor public settings, venues, gatherings, and workplaces, such as but not limited to offices, retail stores, restaurants and bars, theaters, family entertainment centers, conference centers, and government offices. The order is in addition to the state health officer order that requires face coverings for all individuals in public transit, indoor K-12 schools, childcare settings, emergency shelters, cooling centers, healthcare settings, correctional facilities and detention centers, and homeless shelters, and also requires face coverings for all unvaccinated individuals in any indoor public settings.