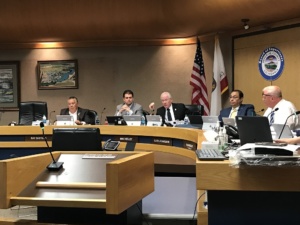 The Imperial County Board of Supervisors approved a letter supporting a bill that would establish a commission that will deal with California-Mexico issues.

This bill introduced by State Senator Ben Hueso was presented in the month of February and aims to have a more solid relationship with Mexico and deal with legislative and environmental issues that affect the border community.

Senate Bill 558 would establish the commission on California-Mexico Affairs, consisting of seventeen members. The bill tasks the commission with improving collaboration between California and Mexico to address matters of particular concern to California. The commission would further this mission by holding hearings, cooperating with other state agencies, appointing advisers or advisory committees and advising the state on matters of particular importance regarding the border and close proximity to Mexico.

County Supervisor District 1 Jesus Eduardo Escobar said that it is important to open the lines of communication between California and Mexico but the commission should focus on issues that affect the border.

“California has a lot of economic potentials that can be used to help us that live in the border, especially in Tijuana-San Diego and Mexicali-Calexico region,” Escobar said.

“We still don’t know how the commission will be composed but I hope it doesn’t become a debate committee and really takes action on issues we have in the binational community,” Plancarte said.

Existing law established an Office of California-Mexico Affairs in the Trade Commission Agency, which is no longer in existence. Understanding the need for an organizing entity to coordinate interagency cooperation, an independent counsel was formed through Assembly Bill 3021. Formally known as the Border Relations Council, this entity was tasked with coordinating cross-border programs, initiatives, projects and partnerships within California state agencies.

Unfortunately, the Border Relations Council has failed to have adequate authority and funding to address issues of high importance with our border with Mexico. The council only hosts two hearings a year, and only hosted one hearing this past year because of the difficulty in organizing meetings between all members of the Governor’s administration.

The bill summary states that the continued rhetoric about “building walls and shutting down our border only creates more barriers to achieve this, California must take action to protect the health, safety, and well-being of the people of California.”

Hueso said that by establishing a state commission, they can ensure taking steps to address important matters of concern to Californians resulting from the shared border and proximity to Mexico.

The commission will address issues such as understanding the scope of the issue of binational students-students who attend schools on both sides of the U.S. Mexico border as well as environmental issues at the Tijuana River Valley and Calexico New River, addressing poor air quality at the border, cross-border workforce, improving trade corridors and lowering border wait times, and recommendations as to how the state should address migrants and refugees at the border.