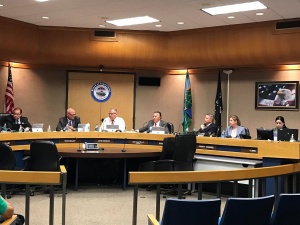 The Imperial County Board of Supervisors endorsed legislation that would legalize industrial hemp production by the federal government.

On Jun. 28, the U.S. Senate passed on a bipartisan vote, 86-11, the Agriculture Improvement Act of 2018, commonly known as the farm bill. In the United States, the farm bill is legislation that sets national agricultural nutrition, conservation, and forestry for approximately five years. The version that the Senate passed in June includes a measure, sponsored by Senators Mark Warner and Tim Kaine, which legalizes industrial hemp production by removing hemp from the definition of “marihuana” in the Control Substances Act and reclassifies it as a commodity.  Hemp is defined as having less of 0.3% tetrahydrocannabinol, thus having no narcotic capability.

The 2014 Farm Bill authorized industrial hemp to be made available for agricultural purposes, but not commercial.  In order to federally legalize commercially grown hemp, Congress must remove hemp from the Controlled Substances Act.  The provision in this year’s bill does not only remove it, but it prohibits anyone with a drug crime felony from participating in the legal hemp business and makes hemp eligible for the federal crop insurance program.

The United States is the biggest consumer of hemp in the world, but since it is illegal to grow it, it has to be imported from other countries.

The County of Imperial believes that if industrial hemp is legalized for commercial purposes it can benefit the area and bring economic development.