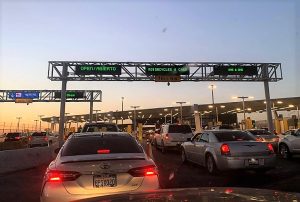 For more than a year, the hours of operation at the Calexico East Land Port of Entry changed from 6 a.m. to midnight to 6 a.m. to 2 p.m., reducing the hours of operation in its passenger portion by ten hours. Although U.S. Customs and Border Protection’s initial justification for reducing the hours at this port of entry were due to decreased traffic volume due to the travel restrictions that were implemented to mitigate the spread of COVID-19; it appears that a year later, travel between the countries are increasing, leading to longer wait times at the border. Most recently, the board of supervisors heard concerns from constituents regarding the long wait times.

The standard border wait times at the west port after 2 p.m. has been two to three hours and on Sunday, the wait times can last up to four hours to cross back to the United States.

For this reason, the Board of Supervisors sent a letter to U.S. Customs and Border Protection Acting Director of Field Operations Anne Maricich requesting consideration of expanding hours of operation at the Calexico East Land Port of Entry.

“Although the change in the hours of operation only applied to the passenger’s portion and not the cargo/commercial facility of the port of entry, there are still significant traffic impacts leading to delays at the Calexico West Port of Entry,” Chairman Michael Kelley said.

The letter said that local industries and organizations employ U.S. citizens who reside in Mexicali, many of which are considered essential workers. Long wait times lead to tardiness or absenteeism, which lessens the effectiveness of that company or organization.

Aside from residents who travel back and forth between both countries for professional, medical, or personal purposes, a large percentage of workers employed by agricultural companies located in Imperial County live in Mexicali and cross the border every day.

“As we are approaching the summer months and the temperature begins to rise in Imperial County, farmers and ranchers often implement night and early morning production schedules limiting worker activity and to protect their employees when temperature s reach 95 degrees and above,” Kelley said.

The letter asked if there could be an increase to the hours of operation of the East Port now that COVID-19 related restrictions are slightly loosening.

“Any changes or modifications made at the port of entry directly impact our local economy, and potentially our air quality with the idling vehicles and it is imperative that the County of Imperial is informed of any plans to modify operations at any of the three ports. It is our understanding that most ports of entry along the U.S.-Mexico border are operating at their regular standard operating hours. Could you please justify continuing the adjusted, minimized operating hours for the Calexico land port of entry? Therefore, we respectfully ask you to expand the hours of operation at the east port to improve the congestion and delays at the Calexico West Port of Entry? Kelley asked in the letter.