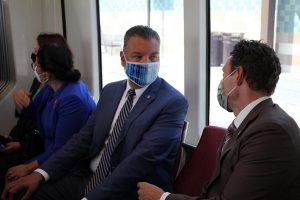 It’s been more than 18 months since the non-essential border travel restrictions were put in place to stop the spread of COVID-19 within the U.S.-Mexico border. At the time it seemed like a rational idea but the changes to the operation of the port of entry have made it difficult for people to cross each day.

On May 11, 2021, and as requested by Supervisor Jesus Eduardo Escobar, District 1, a letter was ratified by the Imperial County Board of Supervisors and was sent to the U.S. Customs and Border Protection Acting Director of Field Operations Anne Maricich requesting consideration of expanding hours of operation at the Calexico East Land Port of Entry. The situation regarding the hours of operation remains with no change; therefore, the board decided to send a second letter to be submitted to U.S. Senators Diane Feinstein and Alex Padilla, and Congressman Juan Vargas urging their attention to this matter.

Eighteen months later, the border remains close and affects cities like Calexico that are dependent on the buying power of Mexicali residents.

“We need to unite with all the cities in the Imperial Valley to send a message that we need to help us with the border since it’s affecting all of us,” Supervisor Escobar said.

Escobar mentioned that the limited hours of operation and the construction taking place at the port of entry and highway 98 in Calexico are causing a “perfect storm” of delays and an increase of traffic going both ways.

The letter, dated Sept. 24, was signed by the five supervisors asked the federal legislators to seek an emergency meeting with U.S. Customs and Border Protection officials in the interest of securing a commitment that will allow the port to return to normal operations.

The Calexico East LPOE hours of operation for passenger border crossing were significantly scaled back early last year in response to the COVID-19 pandemic. Predictably, the continued closure of vehicular traffic at the port beginning at 2:00 PM each day is causing horrendous traffic conditions at the neighboring Calexico West LPOE. Traffic congestion between to 2:00 PM and 8:00 PM Monday through Thursday and between 2:00 PM and 10:00 PM on Friday effectively divides the city of Calexico in two, with commute times of 30 to 45 minutes the new “normal” when traveling from the east to the west side of the city. Moreover, EMS personnel responding to any emergency west of Highway 111 are unable to arrive on the scene in a timely fashion, putting citizens at extreme risk.

Further exacerbating the situation, the operational efficiency at the Calexico West LPOE continues to be degraded as a result of ongoing GSA construction action activities at the port, which has created a bottleneck in the existing vehicle inspection lanes. Recently installed speed bumps have made the bottleneck worse while construction enhancements on Highway 98 have complicated traffic flows for vehicles traveling East-West as well as North-South.

“While the onset of the COVID-19 public health emergency was the justifiable rationale behind the initial operational changes at Calexico East, it no longer stands to reason that the port should continue to operate at reduced capacity. As you’re likely aware, Imperial County has one of the best vaccination rates in all of California-94 percent of our eligible population has been vaccinated with at least one dose of the coronavirus vaccine. 77.2% of our eligible population is fully vaccinated. Additionally, the decline in COVID-19 caseloads in our region should allow us to re-evaluate and adjust accordingly. It is also important to note that numerous other border ports are not currently subject to modified operational schedules. Calexico East should be no different.”