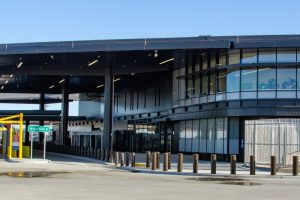 The Imperial County Board of Supervisors is asking California U.S. Senator Alex Padilla to allocate money for the Calexico West Port of Entry project and to support an ambitious project spearheaded by San Diego State University that would bring a new level of education for local students.

The County of Imperial has submitted a request for Community Project Funding, also known as congressionally directed spending or congressional earmarks, through Senator Alex Padilla for $99.7 million so that the final phase of the Calexico West Land Port of Entry reconfiguration and expansion project will be funded in the fiscal year 2022 appropriation process.

Phase 1 of the Calexico West Port of Entry reconfiguration and expansion project was completed in September of 2018 and consisted of new inspection lanes in both directions, a new command center for U.S Customs and Border Protection, and a southbound bridge over the New River.

All told the federal government has committed a significant amount of resources for the Calexico West Port, including $12.4 million and $9.4 million for site and design work in fiscal years 2007 and 2008, respectively; $98 million in the fiscal year 2015 for Phase 1 construction activities; and, $191 million in the fiscal year 2019 for Phase 2A construction. According to the General Services Administration, a remainder of $99.7 million is needed to fund and complete the project, Phase 2B.

The County was informed on the afternoon of May 18, that the Senate is going to allow special accounts to be earmarked, including the GSA’s Federal Buildings Fund. Senator Padilla’s office was the only congressional representative that still had an opportunity to submit a Community Project Funding Recommendations; however, his deadline to submit was May 19.

Upon hearing this, the County took immediate actions to submit a request for Calexico West Port funding to be included in the Federal Buildings Fund for 2022.

In addition to the port of entry, San Diego State University Imperial Valley has submitted a request for Community Project, for $1 million to implement a new project to expand their distance learning programs, called “Building a VITaL  (Virtual Immersive Teaching and Learning) Suite in Imperial Valley.”

The program is meant to increase rural access to quality and equitable education, training, and STEM resources that are otherwise unavailable or limited in scope within the rural region along the United States-Mexico Border. SDSU-IV is uniquely positioned to address the significant burdens within the region as the lone 4-year University in a rural area experiencing economic disparity and endeavoring to build capacity around STEM.

SDSU-IV proposes to create a VITal suite similar to what has existed on the main campus since 2017. The suite will be retrofitted into an existing classroom and can produce a variety of virtual reality, augmented reality, mixed reality, and 360-degree video immersive tools for use across the SDSU-IV pedagogical spectrum. In addition, space will serve as an incubator for training in low-frequency, high-risk scenarios simulating life-threatening medical conditions, celestial events, and scientific phenomena at the micro-scale.

With the VITal suite, SDSU IV will provide access to an array of immersive technologies, including a variety of VR and AR head-mounted displays, VR-capable computers, mobiles VR backpack technology, and 360 cameras.

Future STEM courses will be possible through the immersive technologies to supplement theory learned in the classroom as well; opening the door for STEM-related minors and majors. The SDSU IV ViTaL suit will be available to are high schools wishing to enhance their STEM programs.