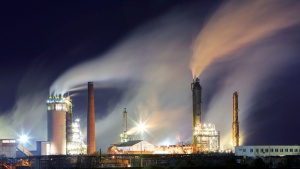 Yesterday, the California Legislature passed AB 1945, the California Global Warming Solutions Act of 2006: Greenhouse Gas Reduction Fund (GGRF), and is now awaiting Governor Brown’s signature.  The bill, introduced by Assemblymember Eduardo Garcia, seeks to improve access to programs funded by GGRF, by expanding the list of co-benefits and allowing the Counties of Imperial and San Diego to include daytime population numbers in their GGRF grant applications.

If signed by Governor Brown, AB 1945 will consider commuters traveling into Imperial County from neighboring Mexico as part of the County’s daytime population.  The bill will make accessing these funds more equitable and viable.  Imperial County’s proposals for GGRF will be more competitive when pursuing significant greenhouse gas emissions reduction opportunities.

“The ability to consider commuters from Mexico to mitigate air quality impacts from neighboring Mexicali will benefit Imperial County residents immensely” stated Chairman of the Board Ray Castillo, District 5 Supervisor.  “The collaboration with Assemblyman Garcia and his staff on this bill has resulted in a positive impact to our county.”

Under current guidelines, GGRF funding is appropriated based on a methodology favoring densely populated communities.  Although Imperial County rates high amongst California communities most affected by various sources of pollution, based on low population data the County has received very little GGRF funding over the years.

The author of the bill, Assemblymember Garcia said, “The success of AB 1945 will break down barriers and better position Imperial County to receive their fair share of climate investments. Increasing the accessibility of these resources will empower our region with the means to combat the unique air quality challenges that have jeopardized the public health and wellbeing of our community.”