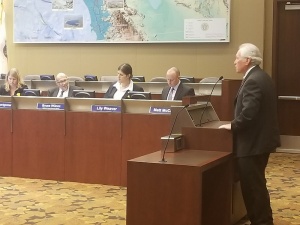 During the State Water Board meeting, Imperial County Board of Supervisors’ Chairman Michael Kelley urged the State Water Board to adopt the final stipulated order as a testament to the state’s commitment to restoring a sustainable Salton Sea.  Chairman Kelley stated, “This is a result of everyone working together and pushing together.  There is no longer a need to discuss what the problems are at the Salton Sea.  We are finally to a point where I can see the door opening.  We have to go forward, we have to seek funding and resolve the problem we have here in the State of California.  Now is the time to take action.”

The revised stipulated order reaffirms the State Water Board’s continuing jurisdiction over the implementation of restoration efforts of the Salton Sea.  Additionally, the adopted order develops restoration milestones necessary to address environmental and human health concerns during Phase 1 of the SSMP, acknowledges the coordination and collaboration required by stakeholders, with the leadership of the state of California, to ensure efficient implementation of the SSMP, commits the state to develop more projects and milestones for the forthcoming phases of the SSMP, requires oversight through reporting of the status of Salton Sea Restoration and much more.

“The California Water Resources Board Stipulated Order is a direct result of the tireless work of Imperial County, Imperial Irrigation District, Salton Sea Authority and the citizens of Imperial County advocating for action.  Although in the eleventh hour, California is now being responsive to the obligations under the Quantification Settlement Agreement.  Now, Imperial County and local stakeholders must remain vigilant to see the 10-year management plan implemented and a long term plan developed,” stated District 4 Supervisor Ryan E. Kelley.