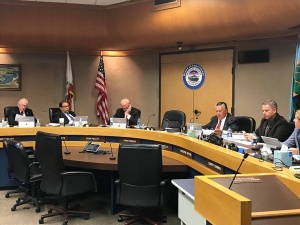 As thousands of Central Americans are marching through Mexico in hopes to arrive in the United States, the Imperial County Board of Supervisors approved a resolution opposing the closure of the border if the caravan arrives the U.S.-Mexico border.

“I must, in the strongest of terms, ask Mexico to stop this onslaught-and if unable to do so, I will call up the U.S. Military and CLOSE OUR SOUTHERN BORDER!” Trump tweeted recently as the caravan began its journey to Mexico.

At the Oct. 23 Imperial County Board of Supervisors meeting, Chairman Ray Castillo spoke about the caravan and expressed his concern about President Trump of closing the border because of the caravan. Castillo said that if this happened there would be negative economic impacts to the Imperial Valley if the closure happens or if Customs and Border protection is ordered to make more detail inspections that will increase border wait times.

Supervisor District 1 John Renison suggested voting on an emergency resolution to take a formal position on this issue.

The resolution that was approved by the board states that a recent economic impact study showed that total spenders by border crossers in Imperial County in 2016 on retail, food, and drink was $1.93 billion, which represents 20% of total spending in the Valley. It was further stated that the county relies on commerce, trade, and impacts of those individuals crossing the international border and a closure would be “devastating to the local economy, employment rate, and families.

“Having the border closed down will have negative effects in the retail industry and will affect our local economy severely,” Supervisor Castillo said.

The resolution will be sent to President Trump, California Governor Jerry Brown, U.S. Department of Homeland Security, and Department of Justice.