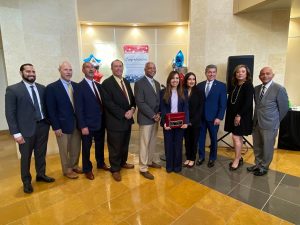 For many girls in Imperial County, U.S. District Judge Ruth Bermudez Montenegro is the inspiration for what they can become in the future.

Bermudez Montenegro is the first valley native to achieve that level, but certainly, she wouldn’t be the last. At a reception at the United States Courthouse in El Centro, the Imperial County Lawyers Association hosted a reception for the newly appointed judge where her colleagues and local judges attended to congratulate her and wish her well on her new post.

“Through hard work and determination, you can achieve your goals. I tell the young people to dream big because you can achieve things that you never dreamed of,” Bermudez Montenegro said.

Judge Montenegro was welcomed by Liza Barraza, President of the Imperial County Lawyer’s Association during her public remarks.

Imperial County Superior Court Referee Michael Domenzain said that Judge Montenegro is an example for the community, especially the young children who will now look up to her.

“Her appointment is huge and the story of where she comes from will give inspiration to kids all over the valley. I spoke at a recent career fair in Heber about her and told them about someone nominated by President Joe Biden and they all got excited about how some that come from the local school and went to college here achieved that,” Domenzain said.

President Joe Biden nominated Montenegro to serve on the  District Court on Nov. 3. After a lengthy process of interviews and hearings, she was confirmed.

Judge Ruth Bermudez Montenegro has served as a Magistrate Judge on the United States District Court for the Southern District of California since August 2018. From 2012 to 2013 and again from 2015 to 2018, she served as a judge in the Imperial County Superior Court in California. Judge Montenegro served as the Imperial County Superior Court’s Family Support Commissioner from 2013 to 2015.

She was Assistant County Counsel for Imperial County from 2011 to 2012 and also served as a Deputy County Counsel IV in 2000. Judge Montenegro served as Assistant Superintendent for Human Resources and Administrative Services for the El Centro Elementary School District in Imperial County from 2002 to 2011 and served as Director of Human Resources for the Imperial Community College District from 2000 to 2002. She was previously an attorney at Horton, Knox, Carter & Foote, LLP from 1993 to 2000.