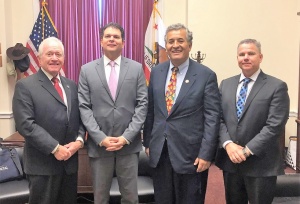 District 3 Supervisor Kelley said, “Traveling to Washington D.C. allows us to have face-to-face conversations with our elected representatives and with the agencies that regulate many important issues impacting our county.” Supervisor Kelley continued to say that he felt “the trip was successful in getting Senator Feinstein’s attention on issues facing Imperial County including the Salton Sea, New River and the importance of completing the Calexico Port of Entry project.”

The delegation met with Senator Dianne Feinstein and Congressman Juan Vargas to discuss several pressing issues, including, but not limited to, the Salton Sea Management Plan, New River restoration, and funding for the Calexico West Land Port of Entry to complete Phase 2 of the expansion and reconfiguration project.  Both Senator Feinstein and Congressman Vargas committed to continue working closely with Imperial County to address the environmental crises afflicting the Salton Sea and New River.  With regard to the Calexico West project, the lawmakers will be working to secure the final installment of funding for the port as part of the fiscal year 2020 appropriations process.

District 1 Supervisor Escobar stated, “It is important to make periodic trips to Washington D.C. to put a face on the issues.”  He continued to say that, “We need to politely knock on the door and if it isn’t being opened then we need to knock the doors down to find solutions to the problems facing our community, from an economic perspective, from a health perspective and from a human perspective.”