Imperial County Declares State of Emergency Due to Migrant Situation 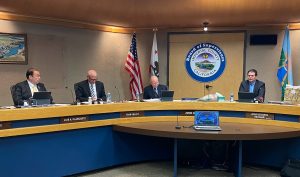 The Imperial County Board of Supervisors joined the city of Calexico in declaring a state of emergency due to the influx of migrants arriving in the area something that most elected officials and activists say will get worse over time.

The board had its first meeting of the year to appoint Supervisor Ryan Kelley as the new Chairman of the Board and Luis Plancarte as Vice-Chairman.

Supervisor Jesus Escobar asked for the County to approve a letter in support of Calexico’s declaration of a local emergency but said they should revisit this issue later this month again.

“This is an issue that will get worse before it gets better,” Escobar said.

While the consensus among the board was to support this letter of support, Supervisor District 5 John Hawk expressed concerns that Imperial County was going to attract more migrants to this area.

“I would never oppose helping people in need but we are a nation of laws. I don’t want the county to become a corridor for migrants,” Hawk said. “Compassion needs to be blended with the rule of law.”

Calexico City Manager Esperanza Colio said that while she understood some of Hawk’s concerns but said the federal government will continue releasing migrants.

“If we were a city with a large population maybe we will have the ear of the federal government but they are not listening to us,” Colio said. “If we are not proactive we going to have them living as homeless in our city and will have them around in other cities. This is to have coordinated efforts so they can reach their final destination.”

Daniela Flores, Chief Organizer of the Imperial Valley Equity and Justice Coalition asked the board to declare a county state of emergency.

“The services required by asylum seekers are beyond the services and facilities available to the City and County. By enacting an emergency declaration, the City and County can access resources not available to our local community while ensuring migrants have access to necessities and can reach their host destination. Enacting an emergency declaration is not only the appropriate response but a humanitarian one. Through this emergency declaration, County, City, and Non-Governmental Organizations can work together to mitigate the impacts of the looming humanitarian crisis on the border.”

On Friday, December 23, 2022, the Department of Homeland Security (DHS) notified the City of Calexico and the County of Imperial of the expected community releases of more than a dozen individuals seeking asylum. The releases are the result of the local shelter reaching its capacity earlier that day. This shelter currently lodges individuals and families seeking asylum.

Since the initial notification, community releases by agencies of the Department of Homeland Security have been occurring daily. Although the County of Imperial is not responsible for the release or placement of individuals and/or family units, the Imperial County Department of Social Services has been working closely with partner agencies and nonprofit organizations, such as Calexico Neighborhood House, to provide humanitarian aid to our most vulnerable and meet the basic needs of those who otherwise would have none.

As a result of the community releases, the Calexico City Council held a special meeting on December 29, 2022, and determined that the rapid influx of migrants within city limits would exhaust City resources and be detrimental to the health and safety of those seeking asylum in the United States, thereby declaring a state of emergency.