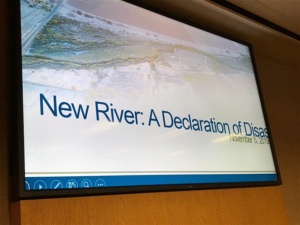 Imperial Supervisors are done with diplomacy and will ask federal and state leaders to take immediate action on the New River as they approved an emergency declaration at their last meeting.

The board met in regular session to approve this declaration that will ask the federal and state government to take action immediately on this issue. For almost 75 years, Imperial County officials have been pleading for help from federal regulatory agencies to mitigate the high levels of potentially disease-causing bacteria and other pollutants in the river.

The County of Imperial is extremely concerned regarding the conditions of extreme peril to the health, safety, and welfare of person and property have arisen within the County, caused by the bypasses of raw sewage and other harmful pollutants, originating from Mexico, into the New River.

These bypasses expose residents, workers, and visitors of the County to toxic substances and pathogens, including but not limited to Salmonella, E. coli, Streptococcus, and hepatitis. Fecal coliform samples taken from the New River have exceeded 160,000 Most and severity of these bypasses, and as of October, there is no plan of action by the International Boundary and Water Commission to address this crisis.

The County Office of Emergency is aware that this is a peril to human life and is a crisis beyond the control of the local county.

Rebecca Terrazas-Baxter, County Intergovernmental Affairs, said that as of recently the county has intensified its efforts by taking to federal and state agencies to address this matter.

Among those efforts it includes several advocacy trips throughout the years to Washington, D.C. to advocate for assistance with the restoration of the New River; Supporting proposed legislation that would establish a federal program within the Environmental Protection Agency to coordinate restoration activities; Adopting a resolution urging the federal government to take decisive action to eliminate bypasses of raw sewage from Mexicali into the New River, sending certified copies to federal and state regulatory agencies, including the International Boundary Water Commission; adopting an agreement with the City of Calexico and IID to jointly provide ongoing operation and maintenance costs of the New River Improvement Project; and Attending the New River Binational Technical Committee meetings in Mexicali.

Most recently, last month, sending a letter to Governor Gavin Newsom requesting his leadership to work with the County to address transboundary pollution issues at the New River as his administration is doing in San Diego County with the Tijuana River.

“We can no longer wait patiently and ask nicely, we must demand action and make everyone understand the critical and chronic risk that our residents encounter on a daily basis through this declaration of a local emergency,” Terrazas-Baxter said.

Jeff Lamoure, Deputy Director of Imperial County Health Department, said a new minute order needs to be adopted that is in compliance with the Clean Water Act as adopted in California regulations with actions and actions for non-compliance.

He added that another of the demands the county is asking the International Boundary Water Commission is having a standardized testing protocol, better adherence to that protocol, and financing to support the Imperial County water testing program.

Supervisor District 5 Ray Castillo lamented the advocacy they have done in Washington D.C. has fallen into deft years.

Supervisor Michael Kelley agreed, “If the New River and the Salton Sea was in Northern California it would have been solved a long time ago,”

“Being diplomatic has gotten us nowhere. Residents in Calexico and Brawley live in the U.S. and deserve clean water,” Escobar stated.