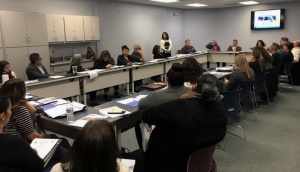 On February 11, 2019, the Imperial County 2020 Census Complete Count Committee (CCC) held a kickoff meeting to begin a census awareness campaign for Imperial County.  Although households will not begin to experience census activity until the end of 2019, the goal of the committee is to educate the public early to better understand the decennial census process. Representatives from more than two dozen organizations throughout the county attended.

The Board of Supervisors recently entered into an agreement with the California Census 2020 Complete Count Office to assist in promoting local participation in the decennial census.  Through this agreement, the County of Imperial is eligible to receive $284,434, contingent upon the County achieving certain objectives, completing certain tasks, meeting deadlines, and adhering to specified contractual requirements.  One of the requirements to obtain funding is the formation of the Imperial County CCC.

Although the County of Imperial will take the lead of coordinating this effort, development and implementation of the outreach plan will be a regional effort.  The CCC is comprised of representatives from the cities, special districts, educational organizations, regional agencies, community based organizations, business associations and other countywide stakeholders.

Chairman of the Board and District 4 Supervisor, Ryan Kelley stated, “By including representatives from various sectors of our community, we will be better equipped to understand the needs of the people of Imperial County and to assist them through the census process.”

The first United States Census was conducted in 1790, since then, the official count of residents has been taken every ten years.  The decennial census is conducted on Census Day, which will be April 1, 2020. Census data is utilized in many different ways including the distribution of federal funds to tribal, state and local governments, redistricting state legislative districts, forecasting future transportation needs, determining areas eligible for housing assistance, assisting federal, tribal, state and local government with programs, services and emergency response, and designing facilities for people with disabilities.  The population totals from the census also determine the number of seats each state has in the United States House of Representatives.

The Imperial County CCC has scheduled its next meeting for March 11, 2019 and will continue to meet regularly through 2020.