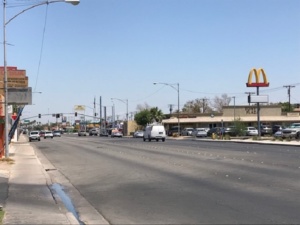 Imperial Avenue in Calexico is a diverse business district with restaurants, auto dealerships, insurance businesses, and money exchange places that serve people that are going to Mexico.

A plan to close access from Imperial Avenue to the new port of entry on Second Street in Calexico raised fears among a group of merchants saying this change would be devastating to their business and will further affect the local economy.

Currently, drivers can go Mexico through Imperial Avenue and then turn westbound to go into Mexico. The proposed change would divert traffic southbound so they can use the recently expanded Cesar Chavez Boulevard.

Traffic studies were made thanks to the support of the Imperial County Transportation Commission and Caltrans to widen Cesar Chavez Boulevard and improve traffic flow with the opening of the new port of entry. One of the advantages of making this traffic change was to facilitate the police, and the fire department has direct access to respond to emergency calls at the west port of entry.

The fire department gets an average of eight calls a day to the port and with traffic on Second Street, it makes it difficult for them to arrive in a short time. In addition, the city can’t afford to have a high number of traffic controllers working to direct traffic since it costs the city a lot of money.

The concerns from merchants prompted city officials to organize a community forum to hear their concerns that took place on July 23 where city administration and the council heard the concerns.

It was decided that during the hours that are not “Peak Hours” in the vehicular traffic from Calexico to Mexicali, the turn will be maintained while other options are analyzed.

Beyond Borders Gazette spoke to local merchants on July 19 asking them how this change to Imperial Avenue would impact their business.

“We used to be the first business border crosser saw when they were coming to Calexico,” Ley Camacho said, “the city never asked for our opinion when they did the traffic study to see how could they help us. The city might ease traffic but will affect business in Imperial,”

Roberto Neri is one of the new business people on Imperial Avenue. He opened his money exchange business last month after working for 25 years supervising the Payless Shoe stores in Calexico.

“Imperial Avenue is one of the main arteries that bring a lot of tax revenue to the city after the Outlets and Walmart. If they close Second Street it will take all the business from us and will be going straight to Mexico,” Neri said.

Another problem Imperial Avenue merchants have seen is a sign that reads “No Access to Mexico” on the corner of Imperial and Seventh Street. According to merchants that signed has confused people and make them believe that there is currently no access anymore through Imperial Avenue hence affecting their sales.

“This change will only cause more traffic to Highway 98 going to Cesar Chavez. I think people should have the option of taking Cesar Chavez or Imperial Avenue when they go to Mexico,” Romero said.

“It will be more logical that the city revisits this so they can make traffic going southbound more friendly otherwise you will be affecting business in Imperial Avenue,” Renison told Beyond Borders in a phone interview on July 18.