IID Welcomes New Board of Directors 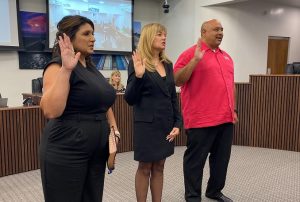 A new era begins at the Imperial Irrigation District board of directors as Gina Dockstader, Karin Eugenio, and Alex Cardenas took the oath of office at a special meeting on Dec. 2. The ceremony was presided by Superior Court Judge Derek Quan.

Just days after the Imperial County Elections office published the final results, a ceremony was scheduled to install the new directors that will most likely bring a new dynamic to the meetings. The new board promised to work together to move the district in a positive direction.

“One of my goals is to make sure our water rights are kept intact and help farmers conserve since there is a shortage right now and I’m also looking forward to the lithium development and helping the north end have a voice,” Director Dockstader told Beyond Borders Gazette.

Director Eugenio has served as Mayor of the city of Imperial and said she is not taking this responsibility lightly.

“I vow to represent all of you to the best of my ability. I have learned that no matter our differences we work for our community and appreciate our differences and backgrounds, we are called to make this a better and stronger place. We need to make the best decisions for our district as a whole,” Eugenio said.

Vice President Cardenas said that he looks forward to another four years of working hard for the ratepayers with the help of staff and the community.

“These campaigns get really contentious. It brings out the best and the worst but I think the next four years will bring the best of the five of us and we will show the United States and the world that IID means business,” Cardenas said.

Eugenio is the daughter of immigrants that came to the Imperial Valley in search of a better life. Her late father arrived in Imperial Valley as a teenager from Punjab, India, and was a small farmer of lettuce, alfalfa, wheat, and sugar beets, and her mother was from Sinaloa, Mexico.

She graduated from Central Union High School, earned a bachelor’s in literature and writing at CSU San Marcos, a masters in rhetoric and writing at San Diego State University, and is currently enrolled in a doctoral program at Claremont Graduate University and SDSU in educational studies.

Dockstader is a fourth-generation Imperial Valley native. Her ties to Niland, Calipatria, and Brawley, which are the major areas of Division 3, started long before her birth.

She is a graduate of Calipatria High School and holds a Bachelor of Science degree in public relations with minors in business and Spanish from Northern Arizona University.

She returned to the Imperial Valley to marry Dustin “Dusty” Dockstader.

Both the Dockstader and the Young families are agribusiness owners in the Calipatria, Niland, and Brawley areas. She is the owner of D&G Farms. She is a businessperson with a strong accounting and financial background.

Her great-grandfather, William E. Young, served as the IID Division 3 director from 1933 to 1940.

An El Centro native, Cardenas attended local schools and graduated from Central Union High School. He holds a bachelor’s degree in public administration from San Diego State University and a master’s degree in organizational management from the University of Phoenix.

He is employed as the executive director for Court Appointed Special Advocates of Imperial County, known as CASA, where he works with trained, community volunteers to speak for abused and neglected children in court to ensure they are given the chance to reach their full potential. Additionally, he is the lead faculty area chair for the School of Business at the University of Phoenix.